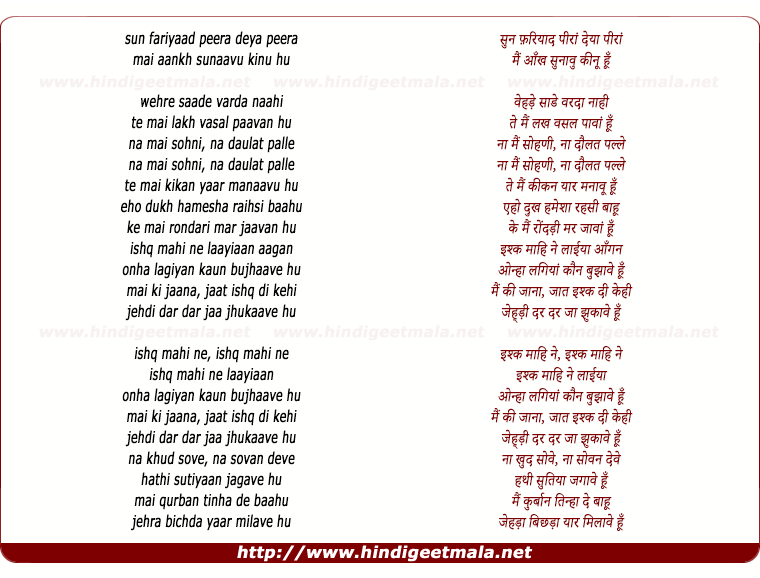 Comments on song "Sun Fariyaad Peeraan Deya Peera (Hoo)"
Ankur Bhardwaj on Monday, June 20, 2011
Till date there was only Kailasa doing some work in bringing real Folk out
to the people. Usually anything in vernacular gets stamped as Folk which is
not the case. Tip Top was outstanding. KK proved why he is probably the
best male singer in the movies. But all this is trivial. What is important
is the possibilities that exist? There is no other country which has a
musical tradition as rich, as evolved and as brilliant as India's and thats
where this program is going to succeed.

Ankur Bhardwaj on Tuesday, June 21, 2011
Once again the same nonsense. Is it some sense of inferiority that people
from across the border are passing condescending remarks about this show.
India extends beyond Hindi or Punjabi & you will never understand it. If
you liked CS Pak more then feel happy about it. Why must you compare? Or
are you somehow trying to justify it to yourself. The band is v good. And
as far as growth of individual musicians is concerned; well you are not
even aware of the non film musicians here.

Pushpit Kharbanda on Friday, June 10, 2011
vocals n lyrics of cs pak are so cultural and powerful that it sweeps you
away, moreover rohail hyaat already has a great experience on how the music
@ cs should sound.. On the other hand, the genres and languages used in the
indian cs are so wast that the grooves can't be made the way they were in
the pak cs.. both are equally good but just acc to the taste.. P.S.: love
the music , not the boundaries :) love from india.. to all ..

Som Shankar Bhattacharyya on Saturday, June 25, 2011
@umairyc No sync in what they are playin ??? u have no idea of dynamics
then !!! PLease look up the internet for Indian bands. i am the last person
to start a debate on whos music is better ... but at least get some facts
right ! The baap of all bloddy fusion bands is In India and the name in
Indian Ocean and the baap of all fusion music is also from India by the
name of Trilok Gurtu !!! Go get a life ...

Vasuda Sharma on Friday, June 10, 2011
great going Harshdeep...what only matters is thats you have an awsome
voice, great control amazing tone...n you have it in you.. everyone one has
opinions... let them have... in my opininon u didnt go off pitch at any
single point throughout the song.sufi prayers are indeed rendered a certain
way... but what matters is that this sounds beautiful to ears... so
overall.. kudos to you...