Video of this song from youtube
Average Rating : 4.72
Total Vote(s) : 75
Please rate this song between 1 star and 5 stars (5 stars being the best). Just move your mouse on the stars above and click as per your rating. Your rating will really help us to improve our website. 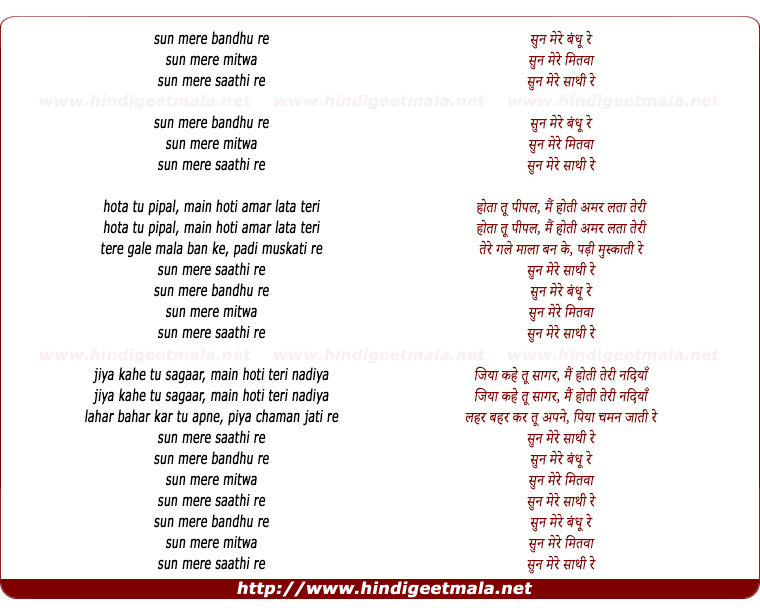 Comments on song "Sun Mere Bandhu Re, Sun Mere Mitwa"
yuanyuanyuanyin on Wednesday, May 02, 2012
As I have stated in my profile, I am from Sri Lanka, a Sri Lankan.
Actually, the "User Name" is not my real name and it is just a "word". My first "user name" WAS just Yuan and then yuayuan and then yuanyuanyuan but all 3 were suspended one by one [due to copyright issues] and then I came up with yuanyuanyuanyin.
That is how this "user name" came in to the scene.
Thank you.

nandu1f on Sunday, June 19, 2011
The haunting voice of Sachin Da brings the poetry to life, thanks to the
sensitive direction of Bimal Roy. Bimal Da had the skill to bring
commercial success to 'art' cinema, a very difficult accomplishment. Every
movie that he himself directed, Devdas, Yahudi, Madhumati, Bandini, Sujata
among others were of such caliber. Thanks rajan ji for a great upload.

drjhonwatson on Friday, January 29, 2010
A great music director if known on earth for his versatility then its
S.D.BURMAN. I am also a admirer of Naushad, Madan Mohan, Roshan,salil
Chaudhury,Kalyanji-anandji etc but S.D.BURMAN has a different and rare way
of musical talent. Talents like this are now only in now a days. I thnk he
was a part of GOD..

rajan8550 on Thursday, June 23, 2011
Thanks for your comments. Music knows no boundaries. The origin of Hindi
and Tamil is thought to be Sanskrit. Therefore, it is not difficult to
understand the gist in any of the above languages. I agree that Sachin 'Da'
was a unique person with a unique voice. Rajan