Video of this song from youtube
Average Rating : 4.38
Total Vote(s) : 61
Please rate this song between 1 star and 5 stars (5 stars being the best). Just move your mouse on the stars above and click as per your rating. Your rating will really help us to improve our website. 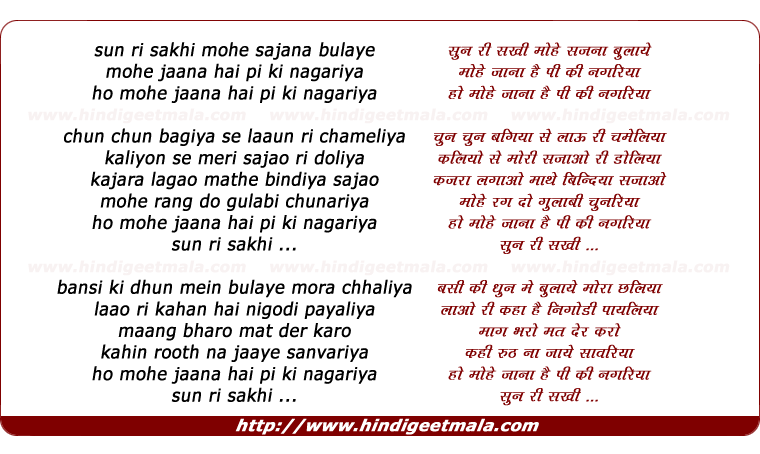 Comments on song "Sun Ri Sakhi Mohe Sajana Bulaye"
crazyoldsongs on Friday, April 16, 2010
oh ! such a beautiful song with a young vyjyantimala dancing gracefully to
the composition of hemant da . heard this sweet song by lata ji after a
long time and had forgotten it was from nagin but i remember it used to be
played a lot on the radio although i have seen this song for the first time
. lovely upload suhanee ji . enjoyed it immensely , thanks to you .

Kay Cee on Sunday, April 11, 2010
When heart sings, hands , eyes and legs just move rhythmically enough to
impart an aura of love floating in the air! Just add some music and there
are flutters all around calling every passerby to join in! Smiles cover the
face from ear to ear before you know a thing! Thanks for this scintillating
video.

imranzaidi6 on Tuesday, March 20, 2012
The lyrics by Rajinder Krishen, a poetic beauty...music by Hemant Kumar,
trancing & mesmerizing... melody by Lata Ji, like an angel from heaven...
acting by Vajiayanti Mala, a dazzling display of artistic talent; The whole
theme is so emotionally touching! Old and distant indeed, there were never
any times so stirring as such memorable reflections of art...and like
voices of a distant star, they are perpetually repeated and savored by the
memory. Superb presentation. Thanks!!

Vinayak Vaidya on Monday, April 12, 2010
What a treat Madame. Many thanks. May God Multiply your tribe. Vinayak
View all 9 comments related to song Sun Ri Sakhi Mohe Sajana Bulaye
Popular Links on HindiGeetMala