Video of this song from youtube
Average Rating : 4.45
Total Vote(s) : 20
Please rate this song between 1 star and 5 stars (5 stars being the best). Just move your mouse on the stars above and click as per your rating. Your rating will really help us to improve our website. 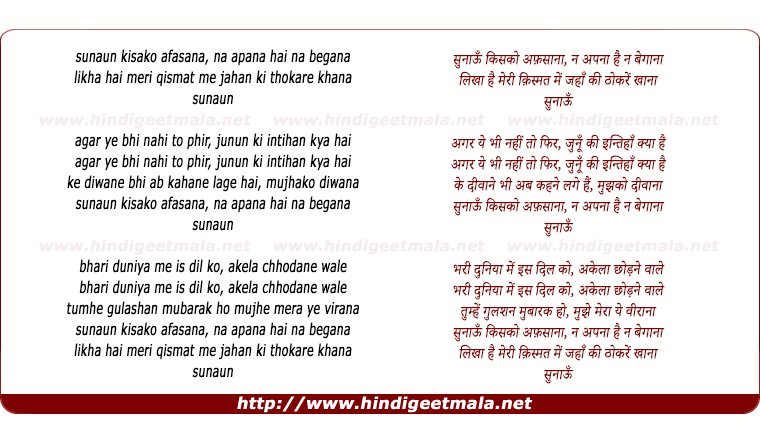 Comments on song "Sunaoon Kisko Afsana"
Bharat Gul on Thursday, January 30, 2014
Agar yeh bhi nahin to phir junoon ki inteha kya hai, ke deewaane bhi ab
kehne lage hain mujh ko deewaana: Such imaginative poetry by Tanveer Naqvi!
The song is rendered with exceptional emotional depth by TM. Sterling
composition. In fact, all of S. Mohinder's soundtracks, though few in
number, are of sterling quality.
One often recalls Pradeep Kumar in the role of a king or a prince or a
dapper young man.So radically different to see him as a pauper in rags
bewailing his fate as he pines away for his lost love. Thanks, Ajay.﻿

Jagjit Singh Ishar on Tuesday, September 07, 2010
s mohinder the highly talented composer who scored music for a no of hindi
& punjabi films having vast knowledge of classical & light music, reigned
the hearts & souls of the music lovers for 2-3 decades. at present he is in
usa leading a retired life. his repertoire speaks of his being a legend
vindicating his awesome contribution as a legacy 2 the music world &
Bollywood. this is one of the best songs of talat sahib. my salutes 2 the
gr8 legend s mohinder. its an xclent upload.

V. Siddhartha on Friday, February 27, 2009
Shirin Farhad, Heer Ranjha, and Laila Majnoon as a trio have the same place
in Asian romantic lore as Romeo and Juliet in the West. Pradeep Kumar often
played the role of prince or king. Here he is a pauper crying his love-sick
heart out with the help of Talat Mehmood's silken voice. Impressive acting,
in a different mode ,by this popular actor. Thanks, Suhanee.

Mohammad Bashir Khawar on Sunday, August 21, 2011
This is one of the best songs of Talat Sb. Very touching lyrics.