Average Rating : 4.56
Total Vote(s) : 48
Please rate this song between 1 star and 5 stars (5 stars being the best). Just move your mouse on the stars above and click as per your rating. Your rating will really help us to improve our website. 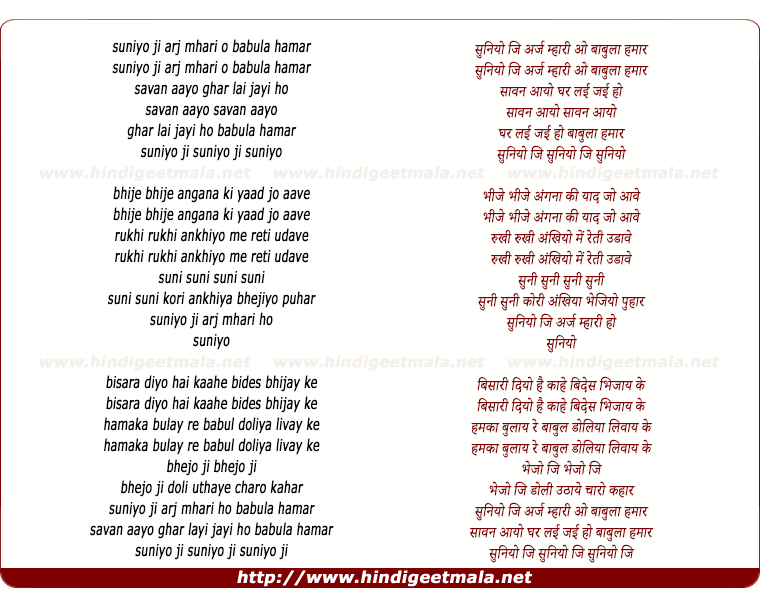 Comments on song "Suniyo Ji Araj Mhaari O Baabula Hamar"
V. Siddhartha on Tuesday, September 14, 2010
If this doesn't go into history books as one of the 5 best Lata songs, I
don't know what will( though I realize that for the other 4 spots hundreds
of other Lata songs will have to compete hard and we would be going crazy
with agony when choosing). Thanks, talk2tubai.

jasbongy on Thursday, February 11, 2010
Are we near Goddess Sarswati ? Sooo divine,beautiful voice that the voice
of Lata ji just stays in our mind and heart forever.10******************
Thanks talk2tubai. Thanks MrRajkoemar ji for sharing. With respect. Sarla.

jasbongy on Thursday, February 11, 2010
Wah wah Raj ji what a beautiful choice you have for Lata ji's gems ! Thanks
for sharing this beautiful song. I have met Dimple and Vinod Khana. Dimple
is very impressive. With respect. Sarla.

surinder k duggal on Monday, November 22, 2010
@classicmusic1000 how do you like this song sung by shriya ghosal when she
was only 12 or something...of course lataji is lataji but shriya is
fantastic also.

classicmusic1000 on Monday, July 05, 2010
This is in Raga Vihanginee, composed for Hridyanath Mangeshkar by great
Kirana Gharan singer, Pt. Mani Prasad. The raga is also a creation of
Panditji.