Video of this song from youtube
Average Rating : 4.46
Total Vote(s) : 127
Please rate this song between 1 star and 5 stars (5 stars being the best). Just move your mouse on the stars above and click as per your rating. Your rating will really help us to improve our website. 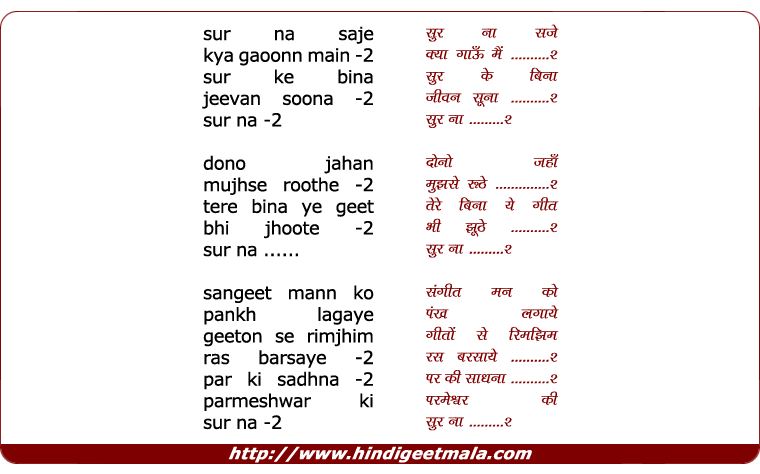 Comments on song "Sur Na Saje Kya Gaun Main"
Mani Menon on Monday, March 25, 2013
Vah, rumahaleji! What a fantastic song! Laakh laakh dhanyavad, mere dost! I
don't want to enter into any controversies but I feel this is one song that
HAD to be sung ONLY by Manna Dey! Can' somehow visualise even Rafi singing
this so wonderfully, hai ki nahi?

anoninus on Saturday, September 18, 2010
A golden era of Indian cinema...Sigh...wish I were born two generations
ago...that way I wouldnt have had to even know folks like Rakhi Sawant,
Mallika Sherawat, Salman Khan, Shahid Kapoor and other wannabees...

ravi shankar on Tuesday, December 17, 2013
A lovely song.One view is it is based on Basant Bahar.Another view is it is
close to Piloo. Or is it a combination of both including a third raaga?.
The voice must be now entertaining Swarglok wasees.﻿

DR ARTI SAHAI on Friday, August 07, 2015
this song z so near the heart .n really it hardly matters
.not having seen the movie .old melodies are immortal﻿