Average Rating : 3.99
Total Vote(s) : 814
Please rate this song between 1 star and 5 stars (5 stars being the best). Just move your mouse on the stars above and click as per your rating. Your rating will really help us to improve our website. 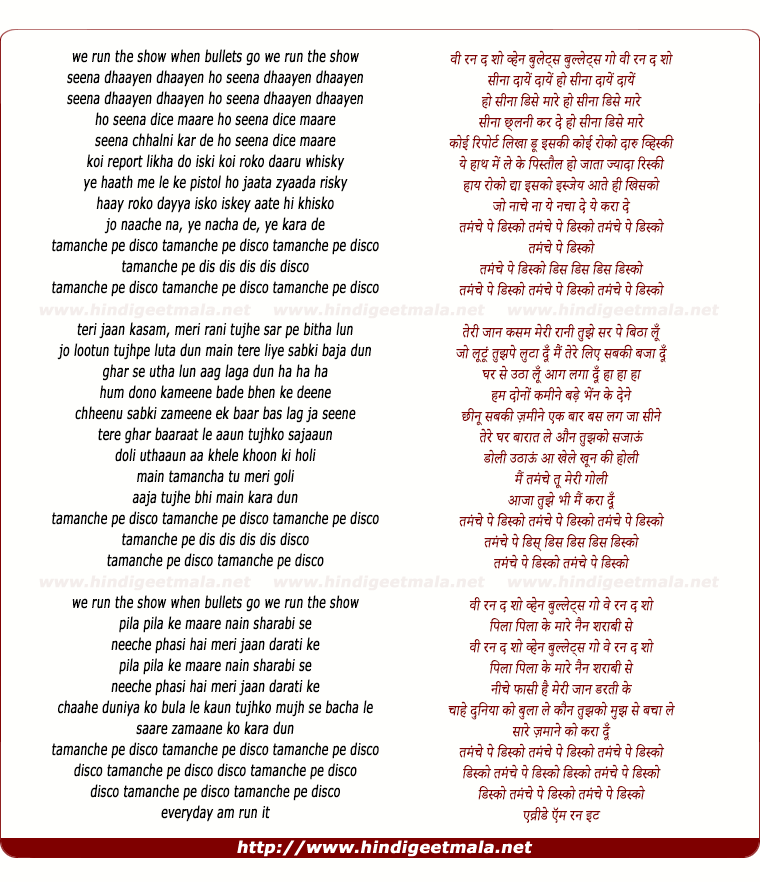 Comments on song "Tamanche Pe Disco - We Run The Show"
HoneyPeach Browniee on Tuesday, November 05, 2013
There is a huge difference b/w being Fat-ass and anorexic! Sonakshi is
none! She has a manly structure, even if she sheds all the fat she has, she
still will look manlier than any hero! She has no curves at all as she is
plain WIDE. And the people who think she has a better face than current
actresses should get their SHEMALE FETISH corrected. She has a wide
forehead and a thick and tortuous nose. The features which make a girl look
delicate and feminine, are deformed in her making her look UGLY

Akhil Agarwal on Friday, October 18, 2013
i agreee with u...but the only thing i dnt like is that u said she is not
so talented i wana telll go ppl watch lootera n ouatmd uill change ur
opinion ..n who said she is not beautiful????common guyzz!! when u pll say
she is in the industry only because of her mother father isnt her mother
father beautifu charming?? they r ryt?? then GO GET A LIFE she is in every
masala film cauz she made it to the top now n now have evryyear 3 4
releases ...so she made it to the top with her talent n beatui

Diddi Kishore on Friday, October 18, 2013
Hi All, This may seem out of the blue but actually, I had a quick work
related question. I and few of my batch mates build a business along with
our full time job in the IT industry and we are looking to expand in India.
So I thought of reaching out to you. I wanted to ask if you are serious to
create some parallel source of income and do something of your own without
disturbing your Current Job? Let me know on kishorediddi@gmail.com.

Vipin D on Friday, October 18, 2013
she is now BUDDHON KI HEROIN...she was luking the mother of Ranveer and now
of Shahid..the way she is choosing her movies(all masala movies) soon she
will be the heroin of Ravi Kisan in bhojpuri movies...n whats going on with
the music directors nw a days..every 2nd song is like this crap...they
should say no to producer/directors who demand such songs in their
movies...GOD MUST SAVE US.

Nimz185 on Sunday, October 20, 2013
Sonakshi isn't even fat she's curvy and is proud to be. It's just people
from this generation are so used to the size zero heroines these days that
they think a curvy girl is fat. I think she looks good and is a unique
actress who doesn't stress herself with having a size zero figure. She's a
beautiful actress inside and out.