Average Rating : 4.57
Total Vote(s) : 21
Please rate this song between 1 star and 5 stars (5 stars being the best). Just move your mouse on the stars above and click as per your rating. Your rating will really help us to improve our website. 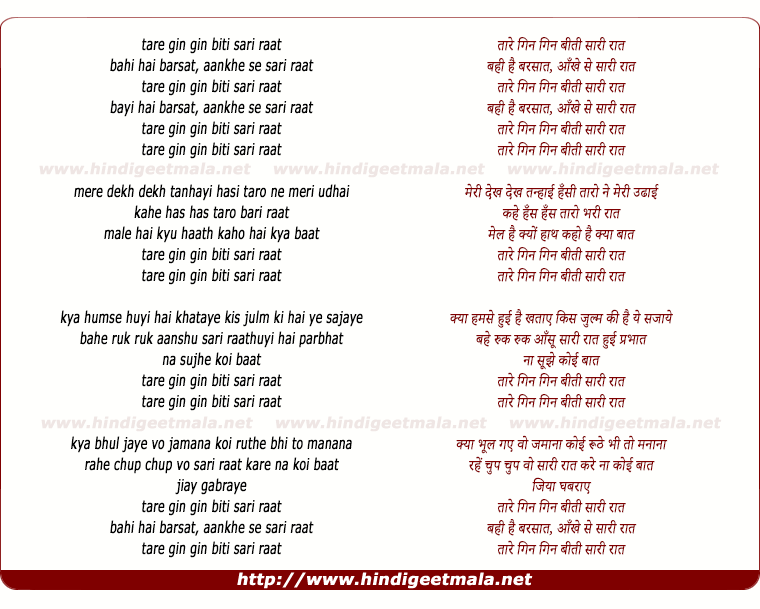 Comments on song "Tare Gin Gin Biti Sari Raat"
Pashambay Baloch on Sunday, March 18, 2012
@saz9297 My dear Zaheer. This film has three lyricists i.e. P L Santhoshi,
Pt. Bharat Vyas and Kaif Irfani. The uploaded song is penned by Kaif
Irfani. Kaif has very beautiful, immortal and melodeous songs in his
credit. He mostly worked with Madan Mohan and Roshan. His some famous films
which I would like to cite are Malhar, Raag Rang, Sheroo, Aaghosh, Gul
Sanobar etc. Despite his melodeous pen he has not been much acclaimed as in
my opinion he deserved. Regards Pashambay Baloch Karachi Pak

saz9297 on Monday, March 19, 2012
@Pashambay .. grateful and profoundly thank you bhai pashambay sahab for
adding more knowledge. infact you are history of film industry and indeed
admirable for those who have interest. i always enjoy your comment on
films/songs. your memory is highly commendable. Kaif irfani was best lyric
writer as you mentioned, true he was not awarded to that level that he was
deserving. once again thanks with the hope you will continue upading our
knowledge regards

Jagjit Singh Ishar on Thursday, February 19, 2015
Thanks for uploading this obscure & forgotten song. A beautiful melodious
composition by the maestro Madan Mohan still reminds me of the school & the
radio days leaving an indelible imprint on the mind.﻿

mohamedrafiq rahim on Sunday, August 09, 2015
Its Lata Mangeshker in my choice again singing at the background of star
nargis in film dhun with star raj kapoor as co hero in the movie what a
time to remember﻿