Average Rating : 4.37
Total Vote(s) : 54
Please rate this song between 1 star and 5 stars (5 stars being the best). Just move your mouse on the stars above and click as per your rating. Your rating will really help us to improve our website. 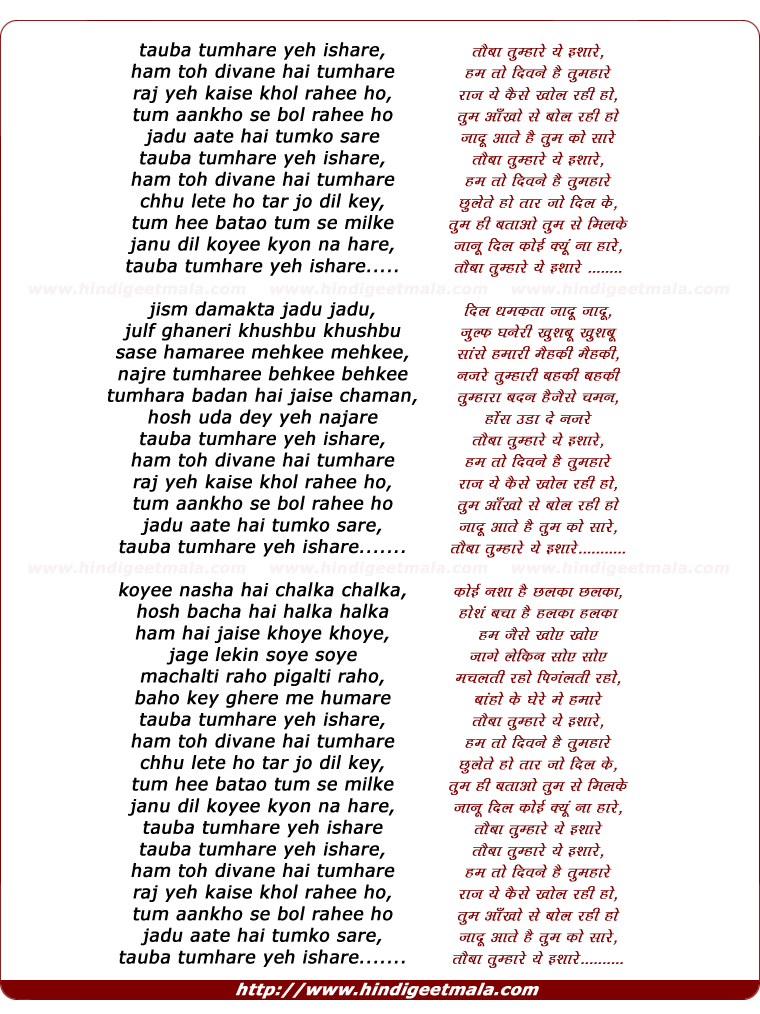 Comments on song "Tauba Tumhare Yeh Ishare"
Lu12340 on Saturday, October 22, 2011
SRK IS MAGIC. HE HAS A STRIKING PRESENCE THAT LIGHTS UP ANY MOVIE SCREEN OR
STAGE. THE MORE YOU SEE OF HIM, THE MORE YOU WANT TO SEE OF HIM. SRK IS
ABSOLUTELY CAPTIVATING, SPELL BINDING, AND MESMERIZING. SRK'S ACTING
ABILITY, HIS GOOD LOOKS, HIS CHARM, HIS CHARISMA, HIS UNIQUE BODY LANGUAGE,
HIS DANCING, AND HIS DIMPLED SMILE ALL COMBINED ARE JUST UNBEATABLE. GOD
BLESS SRK FOR THE PLEASURE AND ENJOYMENT HE BRINGS US THROUGH HIS HARD WORK
AND PASSION.

EILEEN on Friday, July 13, 2007
It's KAJOL. He makes a good on-screen pair with Rani and Kajol but frankly
he looks amazing and gorgeous with either Aishwarya or Preity. Better with
one of them than with Kajol or Rani. He was astounding with Preity in
VEER-ZAARA and amazing with Aishwarya in Devdas.

mylifesux4life on Saturday, May 24, 2008
haha i remember me n u watched this movie all tha time best indian song ever! lol my mom sings this song alll the time it kind of getts annoying but o well i like but im too used to rap music n all that
TheMisnomeredOne on Friday, September 18, 2009
agreed with freakedoutt olden time songs Were the best especially ones from
SRK's films now a days its a miracle just to find a good beat in a modern
song =(