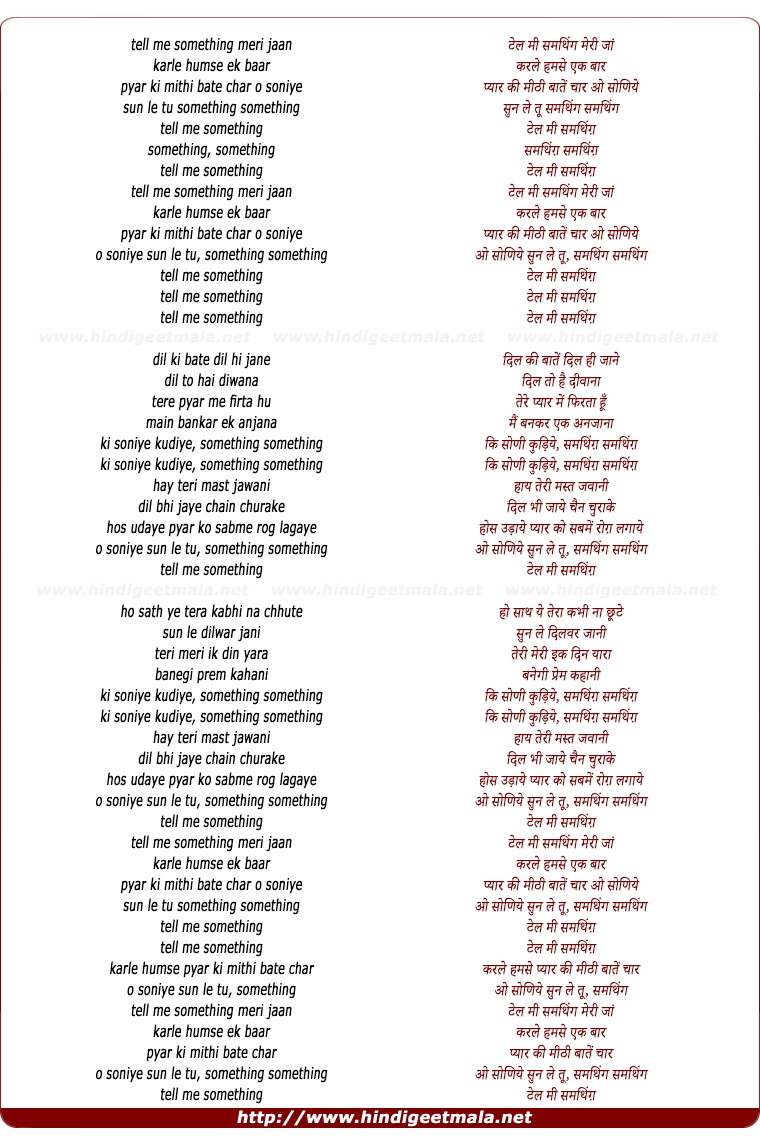 Comments on song "Tell Me Something Meri Jaan"
Mikołaj Wysocki on Thursday, March 12, 2009
What I want to say is that filling your hearts with happiness is impossible
by only believing in your body. Those people are lying to themselves that
they're fully happy. They always feel some kind of deep hole in their minds
'till the rest of their lives. Of course only if they don't realise that
the most important thing in life is being yourself. Not by body, but by
your soul. And the best way to feel it is to look at the mirror, deeply
inside your eyes. Damn... I just can't find words today.

tina gray on Thursday, August 09, 2012
Who's to say that this is not " The Hidden Song " promised on " Life in
cartoon motion" by the UK's Mika? Over My shoulder,unexpected track yes,
but hidden it isn't.THE SONG YOU ARE HEARING HERE MAY BE THE HIDDEN SONG of
MIKA ! A HALLMARK or ASSAY MARK declaring authenticity that this IS the
hidden song would deem the HIDDEN SONG as being CLEARLY VISIBLE would it
not? CLEARLY 24ct something something is present. 24ct plonkers DO travel
by tube indeedy.PECKHAM RYE Stn is overground.Love Today x

sanamo86 on Sunday, February 26, 2012
@MrHonestleeful they maybe higher than me, but deffo higher than u, if ur
da type 2 go around labelling ppl u dnt even know 'dickhead'. For ur info,
i've listened to many Mika Singhs songs. U know Mikas claim to fame is
singing nasally influenced, strained punjabi vocals like 'mauja mauja',
'ahun ahun'. In a world of Sonu Nigam, Rahat, javed Ali, Mohit Chauhan, wid
all due respect wen it comes to vocal ability & variety, mika singh
comparatively sinks 2 to da bottom

Mohammed Umar on Tuesday, December 30, 2008
Thanx for agreeing mate, i personally believe the USP (Unique Selling
Point) of this song is the video and the hot, attractive girl, who tempes a
guy to watchnig this video again and again (although i've olny watched it
once myself), but i must confess the girl chosen to do her job, as done it
HOT agree guys?

sounak sengupta on Monday, September 17, 2012
I am Indian and i know both Mikas. the British one is equally talented as
well..but there is no reason for the non-Indians to bash our Mika..He is a
huge star in our country as well.and many Brit guys here actually ended
up loving this song...Punjabi music can give you the grooves...