Video of this song from youtube
Average Rating : 4.18
Total Vote(s) : 11
Please rate this song between 1 star and 5 stars (5 stars being the best). Just move your mouse on the stars above and click as per your rating. Your rating will really help us to improve our website. 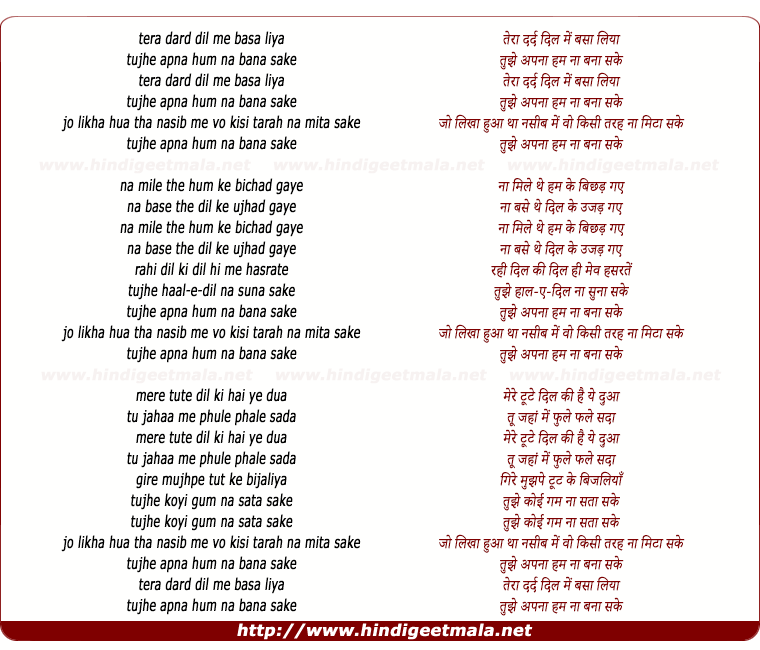 Comments on song "Tera Dard Dil Me Basa Liya"
RealMusicKing on Thursday, May 03, 2012
Rafi avoided Sajjad. Lata loved his work but didn't like his attitude towards singers. Kishore Kumar does not count. FYI, Sajjad didnt' compose in film Dost 1944 but because of the producers wife Noor Jahan, he was declared as the composer of the film. Sajjad betrayed his Ustad/Guru and that's why he was nowhere in life.
RealMusicKing on Tuesday, March 29, 2011
Sajjad was well understood for his amazing compositions. Every singer loved to sing for him. Every Music Director of that time agreed he was uniqe. It was not about not bowing to money or power. It was his demeanor towards other people that led him down stream, one way.
crazyoldsongs on Tuesday, September 28, 2010
never heard but a very beautiful song . sajjad hussain's compositions are
instantly recognised !. his music sounds similar in all his compositions .
lata ji as always soulfully perfect in her renditions . . i wish the name
of the lyricist could be known too . very many thanks for the beautiful
song . i loved all your selections which are very rare , for lata ji's
birthday .

Harjap Aujla on Tuesday, March 19, 2013
A song composed for the classes. Sajjad never stretched the singer to
his/her limits. He aptly extracted the best out of the singer.

asha1053 on Sunday, May 06, 2012
Beautiful song by Lata Ji and beautiful music by Sajjad Hussain. Love it!
View all 15 comments related to song Tera Dard Dil Me Basa Liya