Video of this song from youtube
Average Rating : 4.41
Total Vote(s) : 237
Please rate this song between 1 star and 5 stars (5 stars being the best). Just move your mouse on the stars above and click as per your rating. Your rating will really help us to improve our website. 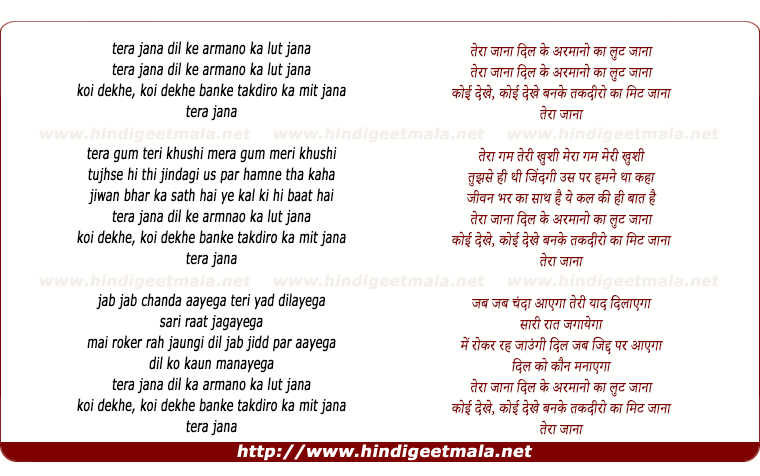 Sholay48 on Sunday, August 23, 2015
All natural creations are just amazing. This song has nothing natural in
it. Every bits of it has been created by man. Lyrics were written, the song
and music were composed, a singer was called in to sing it, plus all the
people involved into making it. One week before the song was not even
thought of and the week after we have a song as beautiful as this. Hats off
to man. Our brain is very powerful. But man is himself part of nature. He
lives only once but he leaves legacies behind him.﻿

Dr Rama Kant Singh on Saturday, October 11, 2014
Terajana a sad song based on rag vairawi. In classical film Anari shanker
jaikishan have given one of the best musical score. Orchestrisation in this
song is truely power packed with running effect of accordian violins nd
flute. Datta Ram the assistant music director maintained the rythem of
percussion throughout the song.﻿