Video of this song from youtube
Average Rating : 4.19
Total Vote(s) : 64
Please rate this song between 1 star and 5 stars (5 stars being the best). Just move your mouse on the stars above and click as per your rating. Your rating will really help us to improve our website. 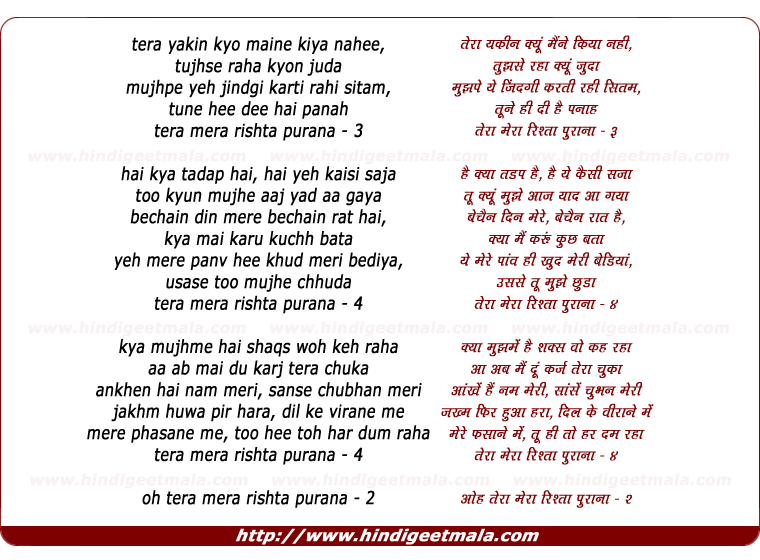 Comments on song "Tera Mera Rishta Purana"
Abhilambo9 on Friday, June 01, 2012
Youare the misguided oneMr.Kanthasingh not Ankita.S Koreagot it's
independence in1919 and it's constitution was formed in 1948.just compare
both countries before u comment.India isthe 7th biggest country while
SKorea is 109th.compare the population.India is diverse in every
area.SKorea doesn't have to dealwith so many problems like India.Sure
SKorea is a developed country but when India is developed like S Korea to
that level it's gonna be the most powerful and dominant country on planet
Earth.

Abhilambo9 on Thursday, July 05, 2012
HDI is directly proportional to growth. That's why most developed countries
have high HDI index levels. India is a developing country S.Korea is a
developed country and that's why they have high HDI adn their population is
nowhere near India's. India has a long long road ahead but we'll make it
inspite of so much problems we have. No country has our variety, surrounded
by rogue states and corrupt politicians but we still r the 2nd fastest
growing country. India is the future superpower..

uvj12345 on Friday, September 30, 2011
@2dayis2010 hi, ofcuorse you are right hollywood is different class...but
so is the taste of the people in the differnt regions.if we try to make
a matrix movie in india the audience wont accept it and would laugh at
it..and the bitter truth is atleast at this stage bollywood is not ready to
make a huge budget movies like evry second hollywood movie is ... but still
i would say if hollywood is a SUN then bollywood is nothing less then a MOON

Sanjay singh Rawat on Thursday, May 03, 2012
kantha singh south korea has huge help from america technologically same
with china , they were given supercomputers initially and now they
overpower usa in speeds of supercomp. india after 1974 nuke test has so
many sanctions but we developed cheapest supercomp on our own nuke rectors
on our own, china was given help from soviet in nuke tech because of
communist ideology it easy to curse darkness but it worthwhile to light a
candle.

Vinay Kadian on Thursday, December 13, 2012
India,Pak aur Bangladesh aur bichare Nepal,Bhutan,Srilanka ko milakar ---
-United States of Asia or United States of South Asia... this can be
possible only when all Paki terrorists,Naxalites and all Indian corrupt
politicians got finished... afterwards sub-continent name will be list
of developed nation