Average Rating : 3.99
Total Vote(s) : 100
Please rate this song between 1 star and 5 stars (5 stars being the best). Just move your mouse on the stars above and click as per your rating. Your rating will really help us to improve our website.

you and me together make it all seem right 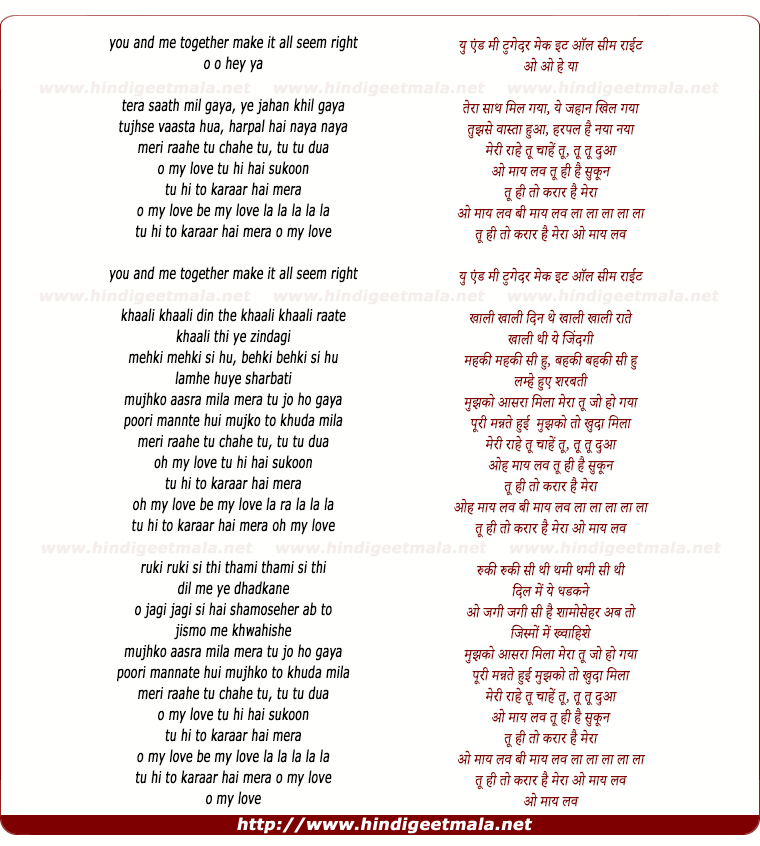 Comments on song "Tera Sath Mil Gaya Ye Jaha Khil Gaya"
TahseeNation II on Saturday, August 04, 2012
it doesn't matter if the director is same as long as the producer/director
dont command the music director to make a song exactly same like he made it
before.. This song is one of the most popular song in Bangla.. Why he alwaz
remakes only popular song.. Ya Ali from Gangster, Janejana from Murder 2,
another song in blood money, and lots of song I dont remember now.. this is
not necessary to make a remake of a popular song which one is already
popular..

pratim sen on Thursday, August 16, 2012
For ur clarification---IT IS NOT A COPIED/TRANSLATED VERSION---BHATTS HAVE
TAKEN THE LEGAL RIGHTS FROM THE BENGALI PRODUCERS AND SINCE JEET GANGULY IS
THE COMPOSER FOR BOTH THE BONG & RAAZ 3, HE HAS EVERY RIGHT TO RECREATE HIS
MAGIC! :) RAAZ 3 SONGS ARE ALREADY ROCKING...GREAT WORK JEETDA.

sonia kumar on Saturday, April 05, 2014
very nice and wonderful song wow the wording so nice Oh My Love Be My
love so nice it took my breath away whn i heard this song for the first
time tonight wow so fantastic song .﻿

samajder4u on Saturday, August 11, 2012
Sonu Nigam the legend...makes even an ordinary number extra-ordinary...this
one is nice melody though...Sonu Nigam rocks above all.Shreya as usual
wonderful...

DEEPAKDLH on Monday, November 26, 2012
Why give to the sonu nigam?benagli oh my love better than this...why dnt give to the kunal ganjawala?if kunal sing this song more romantic & wil be huge it...
View all 97 comments related to song Tera Sath Mil Gaya Ye Jaha Khil Gaya
Popular Links on HindiGeetMala