Video of this song from youtube
Average Rating : 4.51
Total Vote(s) : 55
Please rate this song between 1 star and 5 stars (5 stars being the best). Just move your mouse on the stars above and click as per your rating. Your rating will really help us to improve our website. 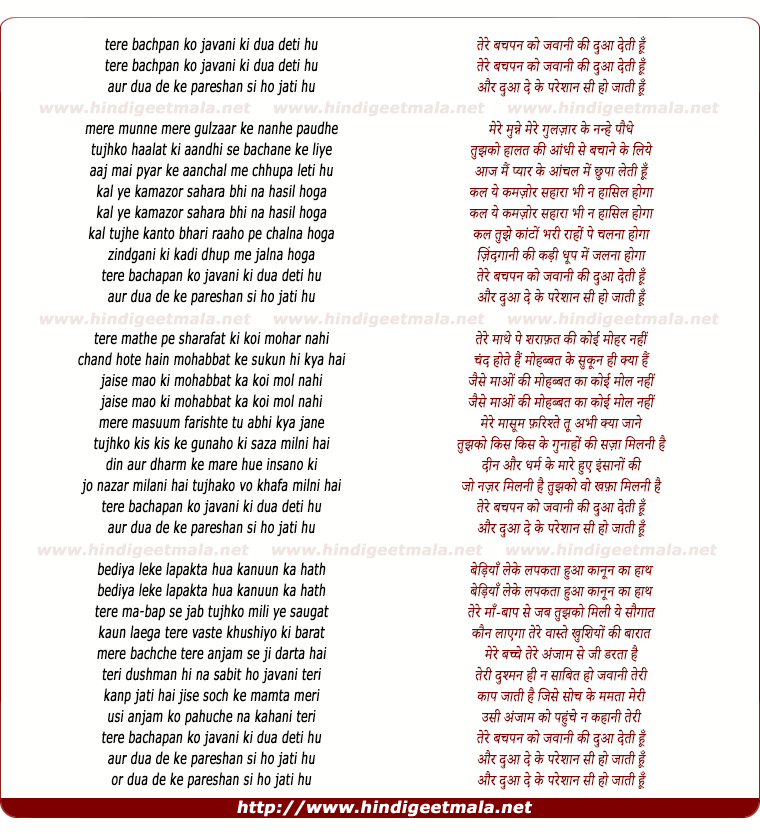 Comments on song "Tere Bachapan Ko Javaani Ki Duaa Deti Hun"
crazyoldsongs on Monday, August 17, 2009
this song is full of apprehension and also resignation of a mother for the
future of her child. the lyrics by the sensitive sahr could not be better
to express the sadness of a mother and jaidev 's perfect music with
lataji's soulful rendition has produced a claasic which always brings tears
to my eyes . this reminds me of another song by lata ji from aakhri khat
which evokes similar emotions. i. e. mere chanda mere nanhe tujhe apne
seene se kaise lagaoon,sooni godi mein kaise uthaoon.

M. Saleem Raikodi Raikodi on Wednesday, September 04, 2013
Listening to any Sahir's song gives an impression that, all the crew i.e
Musicians and the on screen actors would put in that extra. Perhaps his
lyrics would bring out the innermost feelings of the one who are connected
to the song. Even a mother cannot express the feelings for its sibling as
what Sahir has done and Jaidev was a genius Thinking Buddh.

Deepak Goswami on Sunday, May 29, 2011
Too good, my sincere thanks for uploading such a nice song. The lyrics is
meaningful and offcourse Jaidevji's music is mind boggling. All the songs
of this movie is worth watching and listening. Kudos to Sunil Duttji for
making such an excellent film. My utmost thanks to u once again, keep
posting nice songs.

nandu1f on Sunday, May 09, 2010
It is in this movie Sunil Dutt got the opportunity to show his movie-making
and acting ability; and what a masterpiece he made. This song is the high
point in the movie; and of course who else but Lata could emote every word
of it to grab your heart. Thanks Ramchandra ji.

crazyoldsongs on Sunday, August 16, 2009
all greats lyricist composer and singer. i have always loved this unique
lori full of sadness. excellent rendition by lata ji expressing so much
pathos.lyrics fit perfectly for the movie. i think chamogaa ji would
describe it better . thanks a lot for this real gem