Video of this song from youtube
Average Rating : 4.40
Total Vote(s) : 15
Please rate this song between 1 star and 5 stars (5 stars being the best). Just move your mouse on the stars above and click as per your rating. Your rating will really help us to improve our website. 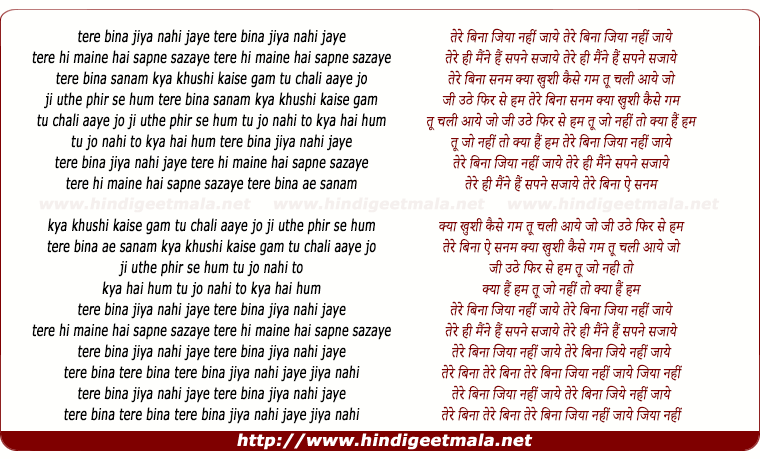 Comments on song "Tere Bina Jiya Nahi Jaye"
Assad Tahir on Monday, November 21, 2011
Oh my God... Shafqat's one of his best singing, I like this song for more
then 4 years and that's the beauty of a good song and singing , simply
awesome!!!

ali raza on Sunday, August 26, 2012
his voice falling streight in my heart specially when he says. Tere he maine hen sapnay sajay
anjani1507 on Monday, August 16, 2010
Wow Shafkat...i just discovered this song...this song and your voice, the emotions therein ,made me realise the depth of the relationship am having with someone who unfortunately is living far away from me!its true , if only he comes back..ji outheee phir se hum!
Sameer M on Tuesday, October 25, 2011
amazing song, great picturisation, incredible effect the song has anytime i
listen to it,... for the last 5-6 yrs... the effect hasn't decreased...

Sandeep Charan on Saturday, November 22, 2014
Shafqat's voice has a honesty which is so moving..We just wish the new
breed of singers learn from him ﻿