Video of this song from youtube
Average Rating : 4.10
Total Vote(s) : 119
Please rate this song between 1 star and 5 stars (5 stars being the best). Just move your mouse on the stars above and click as per your rating. Your rating will really help us to improve our website. 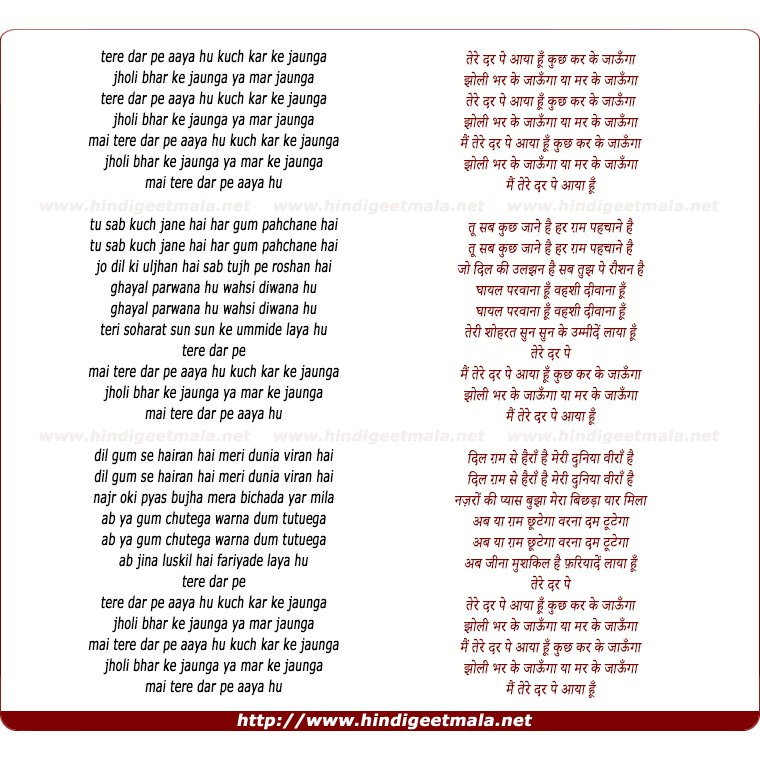 Comments on song "Tere Dar Pe Aaya Hoon"
mialvi9 on Saturday, April 26, 2014
It has been said many times before, but I feel compelled to mention it
again. When Mohd. Rafi sang, it looked as if the actor himself was singing.
His voice is sounding so much Rishi Kapoor's in this song. And as always,
he modulates his voice beautifully to suit the mood of the song. Rishi
Kapoor's expressions are excellent and so are the lyrics by Sahir Ludhianvi
and music by Madan Mohan.﻿

narinder singh on Tuesday, April 26, 2011
mr .shawnkohistani this is an arabic love (laila majnu) this movie made in
india at bollywood this is realy ultimate song . he saying to god to see
his love he wants to see her girl friend . he saying to god .if he cud not
see that he must die at god door would that u were understand hindi
language u must know singer voice mr mohmad rafi ultimate singer

humanfealty on Sunday, November 15, 2009
Life is more than a physical face and biological organism. It is the religious consciousness in which matter of human soul is in the prison camp of human body. It is a wisdom that can only be obtained from the nature of God (Rab). It is a stage of awareness where purity of living in the physical senses without bias.
Ajmal Mehdi

Mrpkv1006 .pkv on Saturday, November 14, 2009
Kya dard hai is gaane mein. Yeh to jadu hai. The story goes that producer
insisted on KK for all the songs in this movie. Madan Mohan said if it is
not rafi then it is not me either. The producer relented. As told by Madan
jis son in an interview

Muslimgirlafg on Saturday, January 22, 2011
love this song.. never really understood the lyrics.. but i always thought the lyrics are like ... i come to ur door so u grant my wishes.. isnt that what we all want? hopefully he does one day grant all our wishes.. :)
View all 62 comments related to song Tere Dar Pe Aaya Hoon
Popular Links on HindiGeetMala