Video of this song from youtube
Average Rating : 4.33
Total Vote(s) : 57
Please rate this song between 1 star and 5 stars (5 stars being the best). Just move your mouse on the stars above and click as per your rating. Your rating will really help us to improve our website. 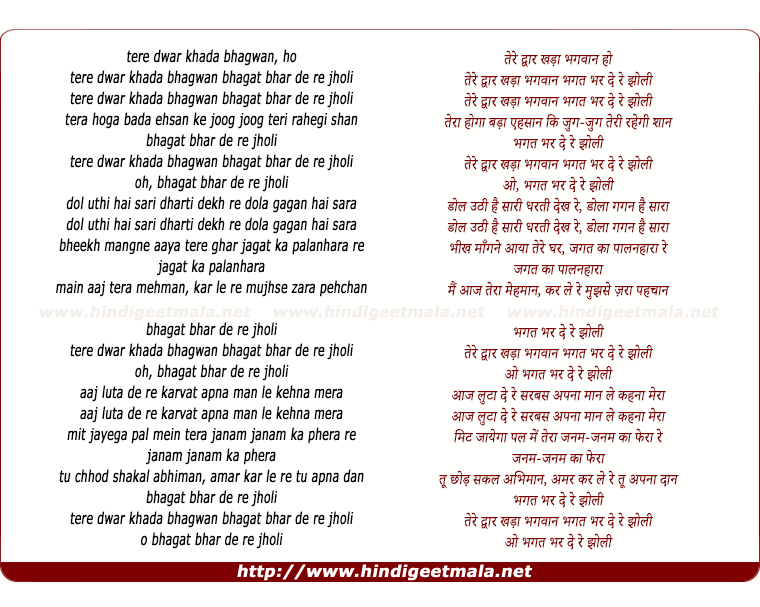 Comments on song "Tere Dwaar Khada Bhagwaan"
aceji on Sunday, June 01, 2014
Waman AVTAR is among many of Vishnu ji's reincarnations. The LORD came down
as a midget and pleased the DEMON KING. The king asked him,in return, ask
for any GIFT. The LORD asked for just a five step long LAND. The king
replied "GRANTED". The lord's five steps included the whole EARTH,MOON and
HEAVENS!!! The story reflects GOD'S POWER.﻿

tubulator01 on Wednesday, October 21, 2009
Great upload! my reaction is similar to srazdan's. I was hauted by this
song since childhood but got to see it for the first time here. The
picturisation, expressions of all the actors are just appropriate for the
devotional nature of the song. Pradeep's voice and shehnai interludes are
full of a divine ascetic resonance!

Salute to Bhakt and Bhagwaan