Average Rating : 4.40
Total Vote(s) : 20
Please rate this song between 1 star and 5 stars (5 stars being the best). Just move your mouse on the stars above and click as per your rating. Your rating will really help us to improve our website. 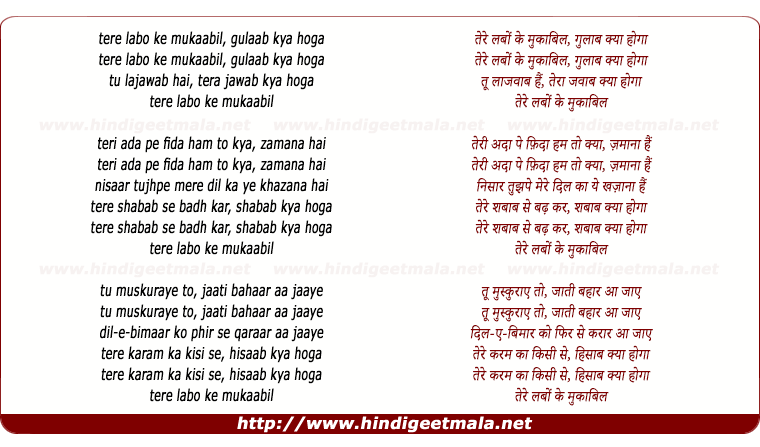 Comments on song "Tere Labon Ke Muqabil, Gulab Kya Hoga"
chamogaa on Monday, July 13, 2009
Wow, my good friend. Hats off to you for the super swift action. So you came to know from Dr. Bukhari as well as from me directly that this Mukesh gem and Jagmohan songs were precious to me! I can't thank you enough!! And thanks to Dr. Bukhari too for reinforcing my request. These songs will delight numerous hearts,. You can be sure of that .
Bharat Gul on Friday, August 19, 2011
When a serenade like this one is sung this sweetly by a man to his beloved,
would she not consider herself blessed with the ultimate treasure in her
life and melt into his arms?What more can one say? It's Mukesh after all !
And who in the past deserved such a paean more than the Indian Venus
Madhubala!! Thanks, Suhanee.

MoleculaRafian on Monday, July 13, 2009
SS got a long In box message-request from Chamogaa jee that one can be a Rafi fanatic but should have a respect for other people's faith as well . MR got a request to upload Jagmohan, PM and this one from the same friend. Hasan jee, Make it a great day, SS/MR
motandas1 on Wednesday, August 19, 2009
A Shiv Kumar Saroj composition. He used to be an announcer at Radio Cylone. He was a poet of standing. Some of his lyrics found place in movies as well. Mukesh listened to some of his poems and offered to sing the same.
kirti kumar Khanna on Tuesday, September 10, 2013
my favourit favourit song by non other then mukesh chand jee toba toba itna
sur suhanee jee thank you thank you i can go on . aha aha