Video of this song from youtube
Average Rating : 4.43
Total Vote(s) : 661
Please rate this song between 1 star and 5 stars (5 stars being the best). Just move your mouse on the stars above and click as per your rating. Your rating will really help us to improve our website. 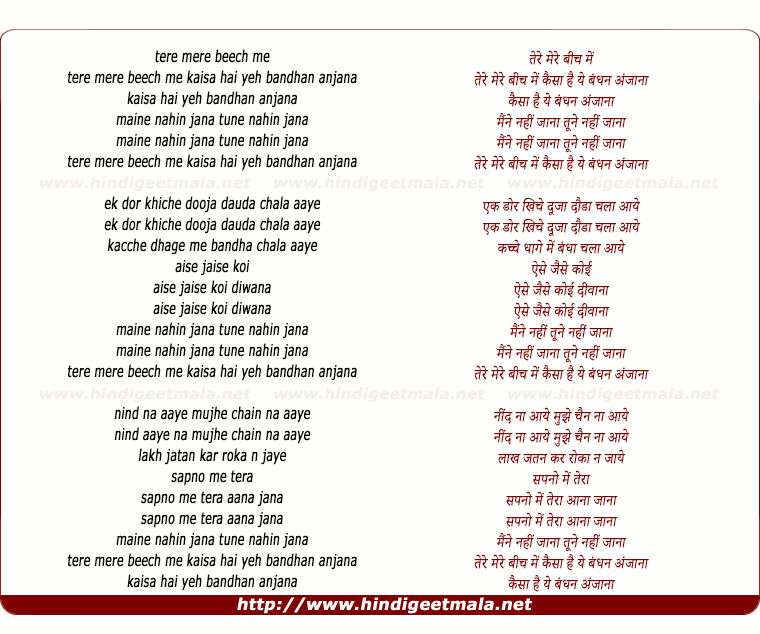 Comments on song "Tere Mere Beech Mein (Male)"
murthyharihar on Sunday, November 30, 2008
This song is fabulous and it is from the only love story(film) after the great Mughal-e-Azam. Eventhough, thousands of films have been made since then, no film is close to these two. And, "Ek duje keliya" remains as the great love story for many generations to come. The film is an example for whenever great men put great efforts together a very great thing is created. Director K.Balachandar, Kamalhassan, Rati Agnihotri, SP.Balasubramanyam, Lata, Laxmikanth Pyarelal and Anad Bhakshi.amazing!!
Sunggu Gugu on Saturday, November 19, 2011
@BlackShani yes... he is such a boring actor. Thats why he has got 3
national awards, 8 international awards, maximum number of oscar
nominations (for 7 movies) from india,his movie (Nayagan) features in Time
magazine 100 best movies of all time (only 2 other Indian movies in that
list). He is an useless actor compared to great actors like ranbir, shahid,
john abraham,abhishek,salman,shahrukh. You northies are unlucky to miss
some of his best works like Guna,Mahanadi,sagara sangamam,Anbe sivam

rafie282000 on Wednesday, June 26, 2013
Dear Friends you can see at that time how much difficulties we have faced
in our love life. It was really hard to talk with your love ,,, only access
Land-line Phone that 2 was under controlled. Now we guys are lucky have lot
of ways not only talk even can see Other. In those time if once she become
angry it took several weeks to reinstate the situation which cannot be
under control ... Anyhow Enjoy life Guys Al Hamdullilah

Ooviya1927 on Wednesday, September 24, 2008
This movie was directed by the tamil fame padma sri K.Balachandar. padma
sri S.P.Balasubramanim won the National Film Award for Best Male Playback
Singer in year 1982 and won 7 Filmfare Trophies The music was composed by
Laxmikant Pyarelal who won 7 Filmfare Trophies The lyrics were written by
Anand Bakshi won the Filmfare awards as best lyricist for this song

aramuskguy on Saturday, April 24, 2010
Lataji is awesome in this song.Her singing brings tears to one's eyes.
Imagine, she was already 50 + when she sand this rather difficult song to
go on a Rati Agnihothri who is perhaps 30 years younger to her! Great
composition by LP and superb lyrics by Anand Bakshi