Video of this song from youtube
Average Rating : 4.34
Total Vote(s) : 241
Please rate this song between 1 star and 5 stars (5 stars being the best). Just move your mouse on the stars above and click as per your rating. Your rating will really help us to improve our website. 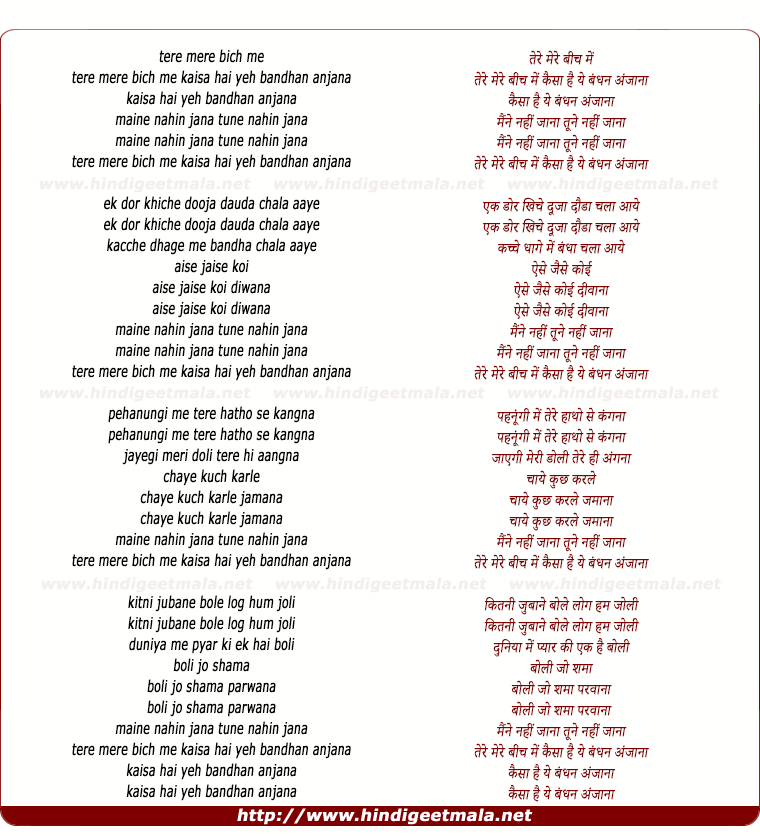 Comments on song "Tere Mere Bich Men Kaisaa Hai Ye Bandhan Anjaanaa"
murthyharihar on Sunday, November 30, 2008
This song is fabulous and it is from the only love story(film) after the great Mughal-e-Azam. Eventhough, thousands of films have been made since then, no film is close to these two. And, "Ek duje keliya" remains as the great love story for many generations to come. The film is an example for whenever great men put great efforts together a very great thing is created. Director K.Balachandar, Kamalhassan, Rati Agnihotri, SP.Balasubramanyam, Lata, Laxmikanth Pyarelal and Anad Bhakshi.amazing!!
ramananlv on Monday, December 08, 2008
The Real love has no language or color or creed that's well expressed in this ever green Love Song. Kamal's boyish manners and the true lover's movements - Make it so great to watch at all times
RamananSLV

zunjuu on Wednesday, May 13, 2009
Why is the language called 'Telungu' in Tamil would be easily explicit if you see the etymology of the word 'Telugu'. The theory goes that the land was called 'Trilinga Desa' denoting the land in between three Shiva temples namely Kaleshwaram, Srisailam and Draksharamam. 'Trilinga' was to the south of 'Kalinga'. Note the 'N' in names of these neighbouring regions 'TriliNga' and 'Kalinga'. TriliNga gave rise to the word Telungu which it turn became Telugu.
tMohank1 on Saturday, January 28, 2012
There is nothing called National language declared by the Republic of India till date. Hindi as primary and English as secondary been identified to be used in official matters. Each state has their own official language. May be some one mis-guided Hindi as National language, if that is the misconception, then you can assume English also as Indian National language. They are only official language can be used in central govt office nothing else.
View all 93 comments related to song Tere Mere Bich Men Kaisaa Hai Ye Bandhan Anjaanaa
Popular Links on HindiGeetMala