Video of this song from youtube
Average Rating : 4.09
Total Vote(s) : 194
Please rate this song between 1 star and 5 stars (5 stars being the best). Just move your mouse on the stars above and click as per your rating. Your rating will really help us to improve our website. 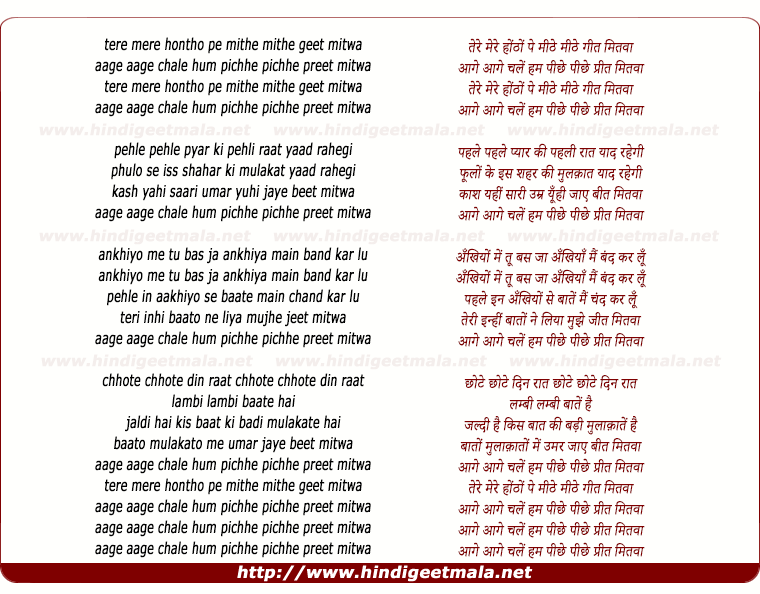 Comments on song "Tere Mere Hotho Pe, Mithe Mithe Git Mitwa"
nawabshaukat on Tuesday, November 17, 2009
raag PAHADI based composition of the two MAESTROS they are SHIV master of SANTOOR and SHIV master of FLUTE They both came together and did MAGIC in the film MUZIC silsila was their first movie 03332604292
pinkpuffball710 on Sunday, April 03, 2011
sridevi is sooo beautiful and i love her she is one of the only actresses that can acctually act

Miraj99 on Wednesday, December 03, 2008
:) she is one of the best actress in Bollywood!
SangeetNepal on Saturday, March 21, 2015
It is Raj Kappor's legacy that has created Kapoor Dynasty in Bollywood film
Industry.
It seems ok partially but there might be kept aside many genuine hero and
heroin. This is very sad for the industry because, One may not be talented
for desired job because one gets births in a particular family. This system
has annihilated real talent of the people.﻿