Average Rating : 4.31
Total Vote(s) : 236
Please rate this song between 1 star and 5 stars (5 stars being the best). Just move your mouse on the stars above and click as per your rating. Your rating will really help us to improve our website. 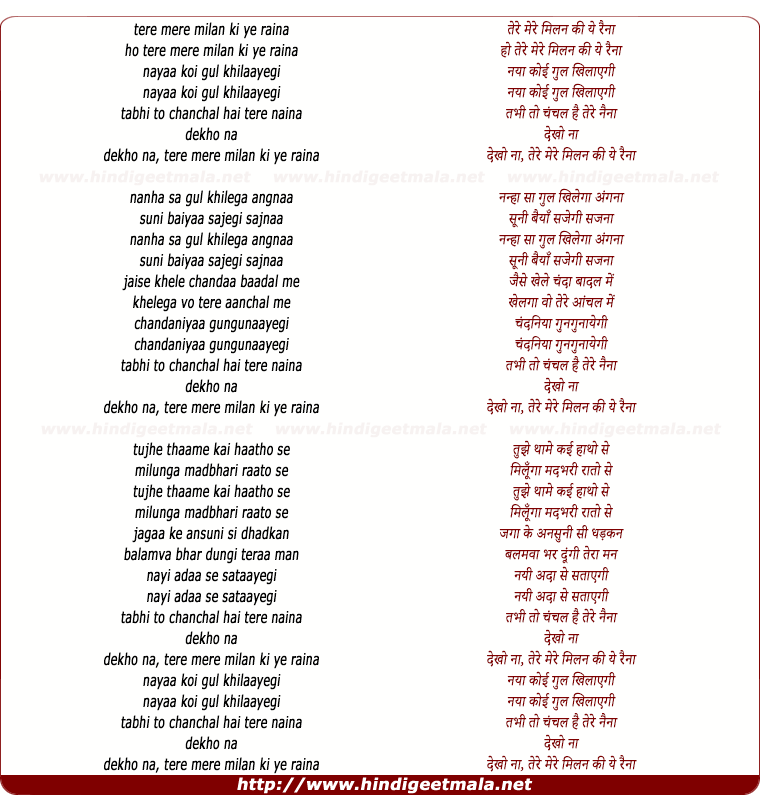 Comments on song "Tere Mere Milan Ki Ye Rainaa"
033789 on Tuesday, June 16, 2009
I totally agree with you. In fact, That's exactly what I thought when I first heard that they were thinking of remaking 'Abhimaan'. No matter how good or bad the new movie turns out to be, it will always be compared with the old one. It's going to be a very tall order to make anything even remotely as good as the old one. In my opinion, it's almost impossible. Jaya Bhaduri was so perfect in the old movie that I don't think anyone else can even be a patch on her. Drop the BAD IDEA please ! ! ! !
033789 on Wednesday, May 27, 2009
A very beautiful song of a wonderful film ! ! 'Abhiman'.another masterpiece by Hrishikesh Mukherjee ! ! And the heart-warming music by S D Burman ! One hit song after another ! ! You just want to listen to them again & again and still don't get enough of them. Only a genius like S D Burman can produce such a wonderful music ! !
Jaya Bhaduri is such a beautiful & talented actress.she simply rocks in this film. Please watch the film asap. Believe me ...you are in for a treat ! Thank you.

033789 on Wednesday, May 27, 2009
Further to Shoonnya's comment, may I add that Jaya Bhaduri suffers from 'nervous breakdown' after having miscarriage of her first unborn child. A very painful separation from her husband leads to clinical depression ultimately resulting in the loss of her baby. She completely blocks the world out and shuts herself in her own world. A painful separation & miscarriage...a perfect recepi for 'nervous breakdown'. Luckily Amitabh comes to his senses and reuntes with her and tries to save her life.
chaitanyajosh on Monday, April 13, 2009
Hey.. thanks for pointing this out mate... I knew quite a few songs where
SD Burman has completely lifted the tune of a song from some other song
(Hum the woh thi, Roop tera mastana, etc..) and heard abt Salil Chawdhury
copying several ravindra sangeet numbers as well. but did not know about
this theft. Sometimes, I wonder why we all consider these composers as
'great' ?? (they could have atleast acknowledged the original source in the
film credits the least...)