Video of this song from youtube
Average Rating : 4.13
Total Vote(s) : 246
Please rate this song between 1 star and 5 stars (5 stars being the best). Just move your mouse on the stars above and click as per your rating. Your rating will really help us to improve our website. 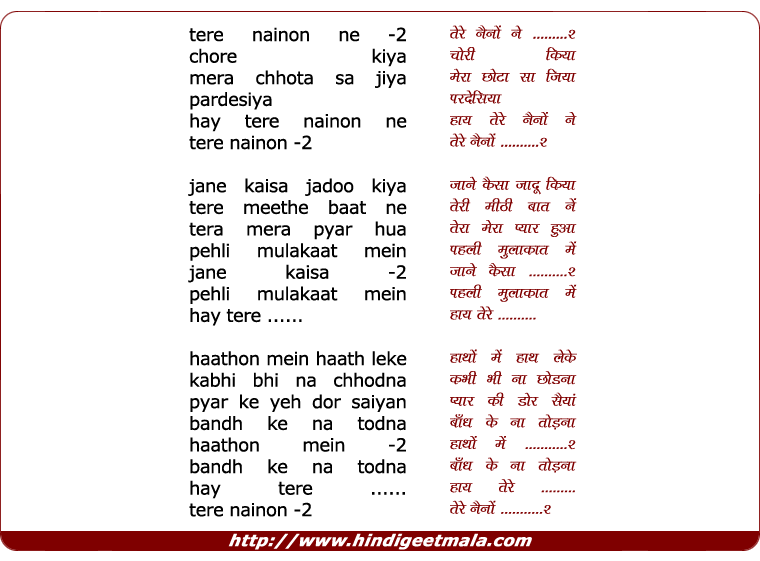 Comments on song "Tere Nainon Ne Chori Kiya, Mora Chhota Sa Jiya"
peddammayi on Sunday, May 16, 2010
This song sends the shivers in my spine even today.
because when I used to walk to elementary school 'sangeet sarita' was a safe time to leave home but if the old songs start on 'vividh Bharati' i am late fpor school.
The pace of walk or run changed with the music being played as every home on the way to school was tuned to 'vividh Bharati'
aah the days!

Bajaury on Tuesday, March 31, 2009
Mesmerizing voice. Her eyes may have looted a lot of hearts but I have lost
my heart to her voice. Perhaps I will be listening to this voice till
eternity. Thanks for sharing song. I wish some one will upload more songs
of Pyar Ki Jeet.

bd gogia on Sunday, July 11, 2010
The name of the music director is wrongly spelt - It is Husnlal Bhagatram -
a handsome, very handsome, person who was forced by circumstances to leave
Bombay at the peak of his career

SPChitale on Sunday, November 01, 2009
agree with all. Overhelming childhood memmories. Music piece is same to jiya bekarar hai from Barsat may be because I heard MDs SJ were with Husnalal Bhagatram earlier
saz9297 on Friday, August 13, 2010
a untrained singer in music, who accepts herself yet she supercedes others
with her honey voice. thank you mirza saheb