Video of this song from youtube
Average Rating : 4.44
Total Vote(s) : 81
Please rate this song between 1 star and 5 stars (5 stars being the best). Just move your mouse on the stars above and click as per your rating. Your rating will really help us to improve our website. 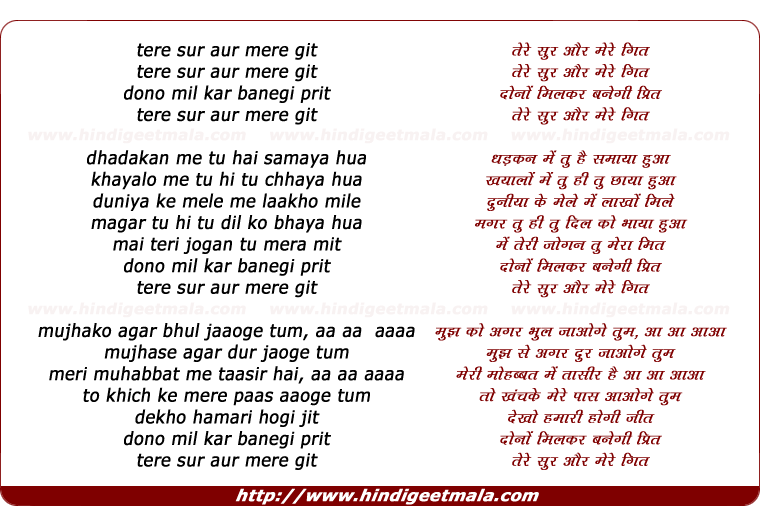 Comments on song "Tere Sur Aur Mere Geet, Dono Mil Kar Banegi Preet"
rumahale on Monday, September 30, 2013
I am reading your comments with all the seriousness; I wonder about the
heap of information you provide for. Having seen number of movies you have
advantage. I had no such opportunity, and, had to be content with audio. I
think Ameeta also figured in "Sawan (1959)". Thank you for additional
information.

Srinivasan Channiga on Friday, March 09, 2012
Shehnai is played by none other than Bismillah Khan the wizard of shehnai.
Mani Menon on Monday, September 30, 2013
Ameeta was a good looking talented actress. She acted in the hugely
successful 'Tumsa Nahin Dekha' opposite Shammi Kapoor and here in 'Goonj
Uthi Shenai' opposite Rajendra Kumar. Her future looked bright. But
somehow, fame eluded her and she gradually slipped into inconsequential
roles in B grade movies. And even those dried up. Sad are the ways of
filmdom. It is difficult to believe that Vijay Bhatt rejected another
actress and signed on the bewitching Ameeta. The other actress? Asha
Parekh!


Mani Menon on Monday, September 30, 2013
Oh yes, rumahaleji! How did I forget 'Sawan' starring Ameeta and Bharat
Bhooshan? I haven't seen the movie but there are some absolutely wonderful
songs in it eg:- the Mukesh-Lata duet, "Nain dwarse man me woh aake, tan me
aag lagaye...", the Lata solo, "Kanha chhedo bansuri, kanhaiya chhedo
bansuri, naache Radha baanwari .." and the Rafi-Shamshad Begum duet,
"Bheega bheega pyar ka sama.." Rumahaleji, if anyone was brought up in
Bombay, he or she would automatically love Hindi movies! :-)

nandu1f on Tuesday, November 15, 2011
If you have a group of friends who like to sing/listen to Hindi songs, try out the song with them. Singing for fun, but with sincerity of musical enjoyment! I am sure you will improve your singing with time with insights from friends. I know because I do the same with our informal group. This is a most beautiful song with such love-filled lyrics and Lata's singing at her sweetest best. Creates tenderest mood. One of Vasant Desai's most memorable creations. Thnaks to Yuan.
View all 41 comments related to song Tere Sur Aur Mere Geet, Dono Mil Kar Banegi Preet
Popular Links on HindiGeetMala