Video of this song from youtube
Average Rating : 4.25
Total Vote(s) : 51
Please rate this song between 1 star and 5 stars (5 stars being the best). Just move your mouse on the stars above and click as per your rating. Your rating will really help us to improve our website. 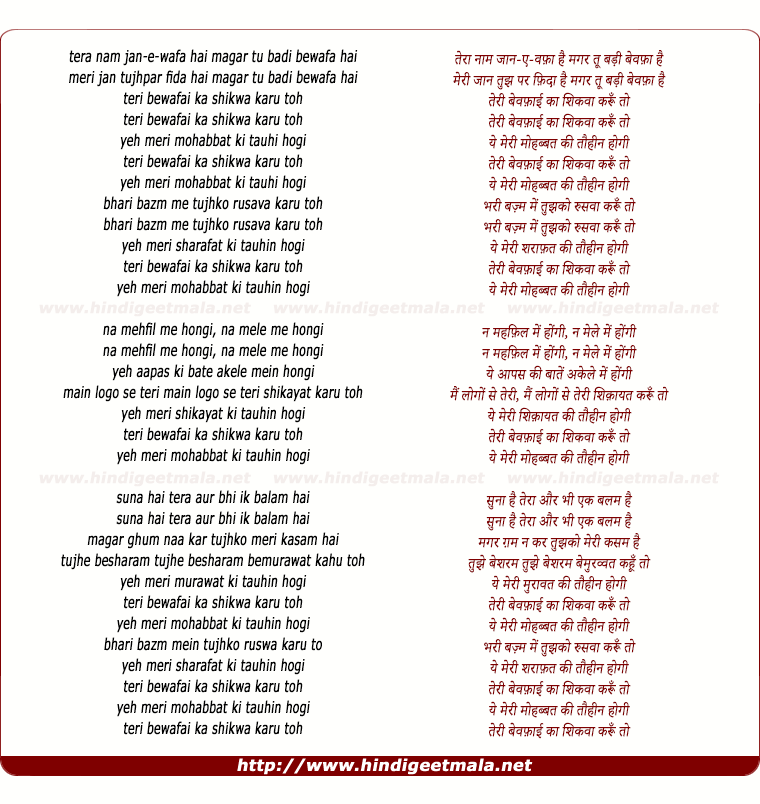 Comments on song "Teri Bewafai Ka Shikwa Karu To"
ARSENJANJAN on Tuesday, November 11, 2008
its basically his birthday in this movie, all the guests are there with his wife and his best friend. But everyone is wondering why he's acting so wierd, but the only ones that know are his wife and his best friend, because they use to be lovers after he found out that Aftar was in love with her too, so he gave up his love towards her so that Aftar could have her
sabbirsa on Sunday, June 27, 2010
so this is the dost dost na raha part of sangam. lolll why do people copy classic. it will always crash and burn (with exception of some).
najjers07 on Thursday, June 04, 2009
classic track from mohammed aziz. 80's era when shabbir kumar and mohammed aziz ruled the bollywood playback scene.
biasedcoin on Friday, May 23, 2008
The Movie was a copy of the Great movie SANGAM , this was also a good movie but not as great as sangam
fgfgfgfgfg56 on Wednesday, September 03, 2008
anil is so chootia! would any real lover call his gf a 'bisharam and be haya' ?
chootie!