Video of this song from youtube
Average Rating : 4.54
Total Vote(s) : 52
Please rate this song between 1 star and 5 stars (5 stars being the best). Just move your mouse on the stars above and click as per your rating. Your rating will really help us to improve our website. 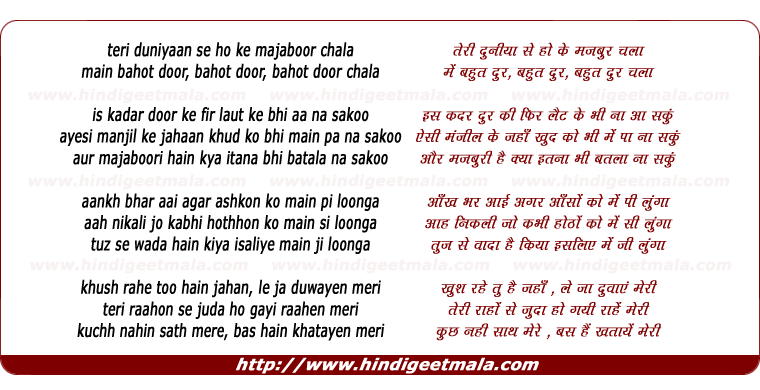 Comments on song "Teri Duniya Se Hoke Majboor"
sam14450 on Monday, December 01, 2008
This song from movie Pavitar Paapi based on Novel with same name very
famous Punjabi author Nanak Singh. I saw this movie with my class mates
about 38 years back, we were two/three boys rest were girls. I never ever
seen so much crying we all were crying non stop, but the girls about 15 of
them were just uncontrollable. It is very painful movie to watch, it has
very very sad ending. I still remember some of the girls had red eyes next
day from crying. Lot of memories. Thanks from Canada. Sam

ParthoGuru on Friday, January 29, 2010
I have been researching on Kishore Da and Mohammad Rafi over the last
couple of years. It is true that Rafi had a better pitch and more fluidity
in his voice, but it has some dampness. Kishore Da's voice is a true
masculine voice, and this richness of his voice, is music to the ears.
Kishore Da could emote very easily, which can be very easily found, through
this song. I love Kishore Da's voice and find the quality of his voice to
be much better than Rafi, whereas Rafi had a better range.

Dr Rajesh badhwar on Sunday, October 09, 2011
i want to tell all of you that this Song is from MOVIE "PAVITAR
PAPPI".this movie was based on the punjabi novel "pavitar
pappi"..by the greatest PUNJABI NOVELIST --"SARDAR NANAK
SINGH".This novel was so popular that it got published in
many forieign languages including ENGLISH. The english title of this novel
is "THE WATCHMAKER"...Just a
masterpiece..i appeal to my dear friends to read the
novel too..

raj1905 on Monday, May 17, 2010
see the depth...the depth only attainable by kishore da.i dont know how
to put it but kishore da wasnt actually a singer.he did something
else...he used to (almost) talk in scale...0 effort, 1000% emotions
embodied on each and every word. if he sings in a context of siblings, he
need not mention words like "sister, bahan etc." he would completely tuned
his feeling according to the song and you can actually make out that the
song is for a sister. thats the genius !!!

Curiousquest2 on Saturday, September 20, 2008
I personally think that some should do not give his/her life for someone whom you have loved in the life ,there is someone who is better in life ,and moreover whatever happen has happened for the good reson, so carry on with your life , instead of bowing down to who does not love you in life ,even if he/she love you after bowing down it will not like before when you first met him/her.
Thanks best advise from Vancouver(canada)