Video of this song from youtube
Average Rating : 4.20
Total Vote(s) : 25
Please rate this song between 1 star and 5 stars (5 stars being the best). Just move your mouse on the stars above and click as per your rating. Your rating will really help us to improve our website. 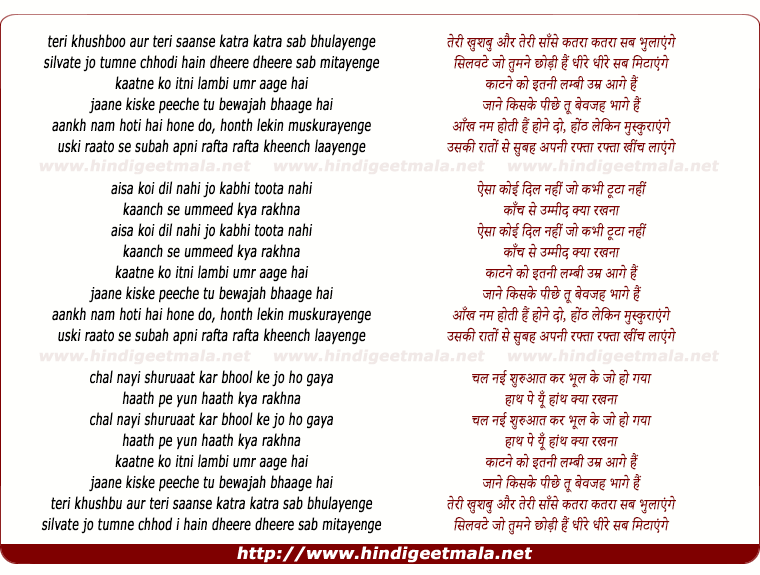 Comments on song "Teri Khushboo (Male)"
Affida Fatahu on Thursday, April 30, 2015
Beautiful song but its little sad anyway it's very nice Arijit has a
melodious voice brillant and very good singer he is always be the Golden
Voice and he sung very well and the superb lyrics. But the film Mr.X has
really disappointed, +Emraan Hashmi​​​ 's next film #HamariAdhuriKahani
will be a hit just because of #MohitSuri has been directed this film and
also he need Emraan to make a hit film like in the year 2000's he save him
to making the good films, hopefully it will not be a flop like his previous
films Rush, Ek Thi Daayan, Ghanchakkar, Raja Natwarlal, Ungli and now this
one is really a disappointment, Mr X is turned out to be a failure. But i
hope his next film it will turned out to be a success in his career. ﻿

shashank jhajharia on Thursday, April 16, 2015
Thanks emraan. after a long break..

Ur expressions r just amazing... it seems so real...

Despite having no such body attraction by doing gym n all... ur expression
, ur personality ( specially in real life) touches our heart.

SANTOSH GUPTA on Saturday, April 11, 2015
Their is no one who has such a goog expression for any situation but Emraan
is so talented . he is perfect actor material but truly underrated . He has
equally talented like amir khan , ifran and nawajudin sidduqui , k.k menon
,﻿

Desi Thing on Friday, April 10, 2015
cgi looks weak..but atleast plot is quite interesting even if its copied or
inspired whatever...just entertain me lol﻿