Video of this song from youtube
Average Rating : 4.39
Total Vote(s) : 1004
Please rate this song between 1 star and 5 stars (5 stars being the best). Just move your mouse on the stars above and click as per your rating. Your rating will really help us to improve our website. 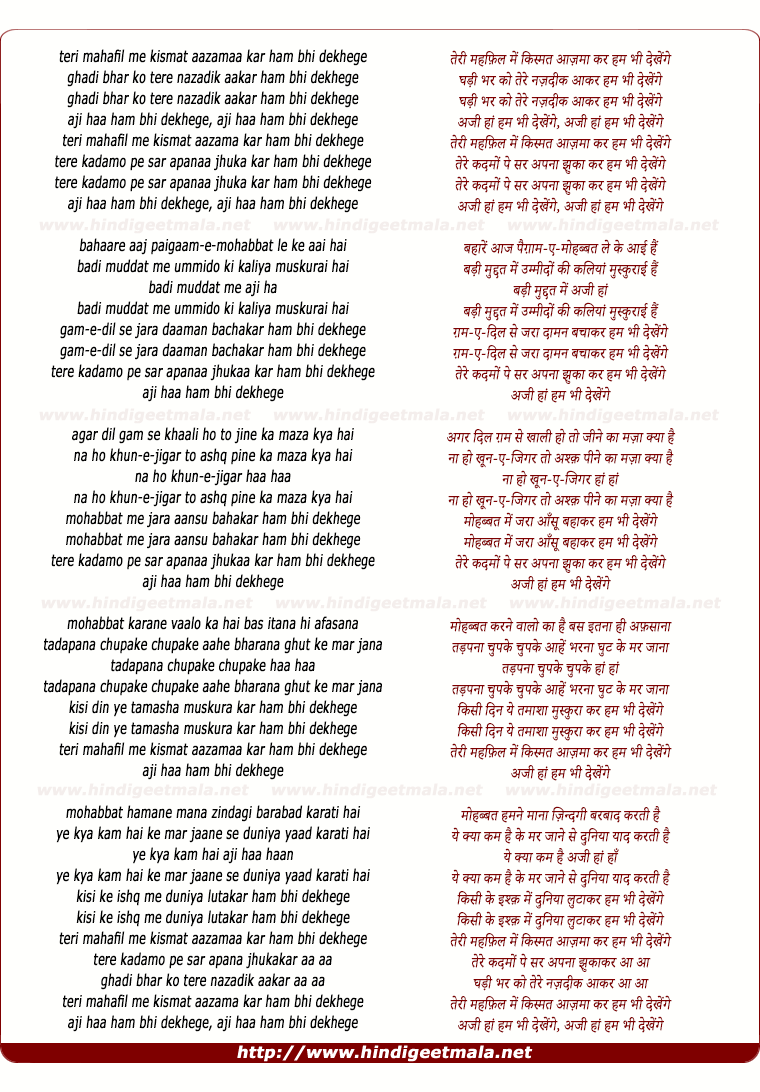 Comments on song "Teri Mehfil Me Kismat Aazma Kar Hum Bhi Dekhenge"
wesfh3ayeawez783456 E5678fphraim75655454 on Sunday, July 19, 2015
First of all Madhubalas beauty can't be compared to anyone and what made
her beauty more elegant was her expression , the way she moved her eyebrows
when she talked or her side smile with dimples ...
There are some actresses who are known for acting or dancing and there are
some that their presence itself was so intimidating that no one really paid
attention to their acting
Like
Vyjayanthimala, Padmini (not Kolhapure)
Meena Kumari, Nutan, Nargis, Rekha , Madhuri Dixit, Zeenat Aman , Parveen
Babi Jaya Prada. ...
I told this dialogue to someone who did me bad once lol
"Quisi Din yeh Tamasha musquraque hum bhi dekhege"
I didn't know God heard me that day ...
﻿

Shalin Bhatt on Sunday, April 08, 2012
That seems more off-white than blue, but regardless, she is meant to play
an 'evil' character in the film. Check out the song Yeh Dil Ki Lagi Kam Kya
Hogi for more evidence (Lata does the playback in that song). The singers
are Shamshad Begum (playback for Nigar Sultana in this song) and Lata
Mangeshkar (playback for Madhubala), along with the chorus. This is the
2004 version of the song, with remastered music and a new chorus, as
opposed to the original 1960 black and white version.

Shalin Bhatt on Sunday, April 08, 2012
This is Urdu. The song is meant to be a competition between the two leading
ladies (Madhubala in yellow/orange and Nigar Sultana in white), both Mughal
empire courtesans. Both use beautiful poetry in the form of song (qawwali)
to prove their worthiness (Madhubala falls in love though). The main
refrain means "In your presence, we shall test our fate and see". This
film, due to its heavy Farsi-influenced dialogue, is difficult to
translate, but the songs are noticeably more neutral.

MrDonNz1 on Tuesday, July 27, 2010
Mughal E Azam Akbar badshah was the king who make india a state and today india's almost all good time histroy was from Mughal e azam time, after the afghan tigers like Dorranies, Ghaznawees and etc...i am saying word, language, poem and love was from those peoples and right now in India the habit of love is still alive but faces are fake and ugly.Respect to the creater of this song and movie.
Shoaib Chikate on Tuesday, January 13, 2015
Qayamat tak koi singer paida nahi ho sakta lata didi jaise..and its
foolishness to compare anyone with Lata didi, rafi saab, Kishor da, etc.