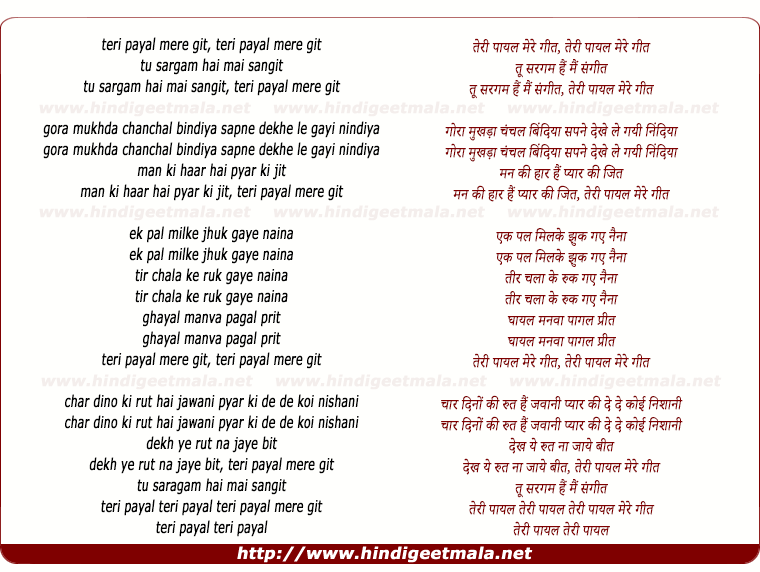 Comments on song "Teri Paayal Mere Geet, Tu Saragam Hai Main Sangit"
Dokhy51 on Wednesday, October 21, 2009
at 4:58, govinda starts to sing something that I don't understand ... I
remember vaguely that this was some sort of competition between the 2,
something about him singing and her dancing and that he's gonna get the
anklets off her by making her dance so hard, or something like that?
However, he finishes his lyrics at about 4:58 starts singing in a language
that is not Hindi? (I'm just guessing now) Obviously she understands what
he's singing and dances accordingly until her anklets breaks . ?

Dokhy51 on Wednesday, October 21, 2009
Oh wow! Thanks so much. Love this song. Especially Meenakshi's dance ...
The quality is not the best (which is understandable converted from VHS
probably), but I must say, after 10 years of looking for it, it doesn't
really matter and I would've taken worse than this too! Thanks again for
sharing. There is just 1 thing: could some1 explain what's happening from
5:00 onwards? I can't understand the lyrics from that point on, is this
something cultural I'm missing? Love it all the same though :)

mammylove1 on Saturday, January 16, 2010
Oh Thanks so much for uploading, been looking for this for years, Years
ago, i used to be so mesmerised by Meenakshi's dance and yes ahem..
Govinda's beautiful face and smile, that i never really noticed SP's
vocals.. that last note at the end is truly awesome. Still drool over
Govinda though, even to this day M. x

nisha08x1 on Thursday, October 22, 2009
Dear Dkhy51 after 4:58, what govinda is singing is called Tarana. Its one of the best rhytmic language in Classical. Same like in english they have Doremifasolatido...in hindi clasical we have saregamapadhanisa.so govinda is singing tarana rhythm.
deedoublee on Monday, November 09, 2009
thanks for uploading, I have been looking for this song for a long time! Meenakshis dance in awesome in this song. I love the film, brings back childhood memories.
View all 29 comments related to song Teri Paayal Mere Geet, Tu Saragam Hai Main Sangit
Popular Links on HindiGeetMala