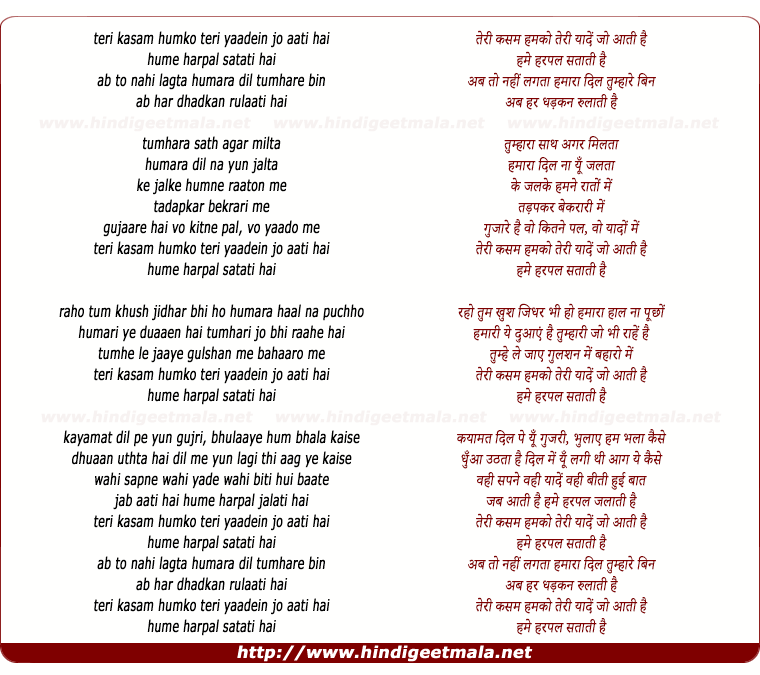 Comments on song "Teri Qasam Hamko"
faisal031382 on Saturday, February 23, 2008
by the way this song is from ajeet singh he was popular in india in early
80's...purana mundir was his first film as a music director...but dont know
what happend to him after making these two great songs 1 woh beete din yaad
hain. 2 teri qasam hum ko

alinafees on Saturday, August 16, 2008
My heartfavourite song ever. I have that song in my Ipod. I love that song.
It reminds me some pleasant and some sad memories. I think this sond fits
on me exactly, few loves few breakupss. ahhhhhh thats life,

SRNZ2003 on Thursday, July 31, 2008
can u plz post me this song in my inbox. i really need this to have in my MP3...loving it over and over again! :)
07795592829 on Friday, March 05, 2010
i lyk to sing as well and abt song dnt hav any comments 4 dis song ouz ok i let u knw how to feel dis song
when no one at home and u got boost music player than wot u hav to do just tune off da lit and keep it loud music and sing wid dis song than u gonna knw wot wz dat mean dis song
and am very sad to say abt people,ouz they listening sad song but dnt knw wots a realty in words
no one feel pain when till she hurt by som one and wouldn't understand mean as well.
blood tiers by shan stranger