Video of this song from youtube
Average Rating : 3.44
Total Vote(s) : 18
Please rate this song between 1 star and 5 stars (5 stars being the best). Just move your mouse on the stars above and click as per your rating. Your rating will really help us to improve our website. 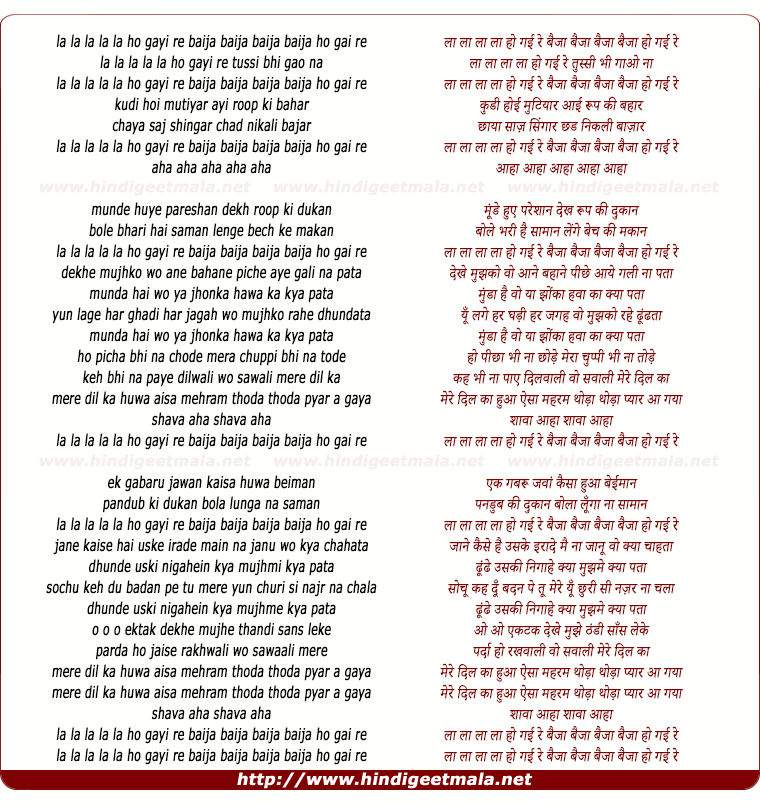 Comments on song "Thoda Thoda Pyaar Aa Gaya"
AksheeShadow on Tuesday, November 10, 2009
hmm yes it is great that a brazilian girl was casted and acted quite well
as an indian girl except her dancing and haav bhav. It is great we have
people from difrent cultures here but the point is that she was not that
great if we forget she was a brazilian :) A person should be given
opportunity becoz they r good and not becoz they tried real hard or becoz
of their background. I loved her in the movie but I still think there could
have been a better indian girl who would have done it better :)

ramya48 on Wednesday, January 27, 2010
can someone please explain why this girl Giselle is getting nomination for
Best Newcomer and Best Supporting Actress when she did absolutely nothing
in the film but look shy. She's very beautiful, no doubt, but how is she
supposed to act in Bollywood films when she hasn't been exposed to the
language or style of dance at all. At least Katrina Kaif has some
indianness to where she's been exposed to the culture and whatnot, but if
Giselle succeeds at all in hindi films, its due to her looks.

CanadianMamba51 on Saturday, March 27, 2010
Harlene Kaur was played by Giselle Monteiro who is a brazillian model. The director of the movie, Imtiaz Ali was looking for a simple looking punjabi girl that represented the 70's/80's he looked for the role and he searched everywhere, he didn't find what he was looking for. Giselle walked into the studio and wanted the role of Saif's girlfriend in the second part of the movie. Imtiaz's wife told him that Giselle would be perfect for the role. I think she did a great job for a non-Indian girl.
warriorsays on Sunday, January 24, 2010
Have PEOPLE forgotten the HISTORY OF INDIA?? Have people Lost SELF RESPECT?? All those PEOPLE who are RELATED to or show and have associations to the mughal dynasty DO NOT deserve to live in India. Those Cunning, Barbaric Foreigners PURPOSEFULLY RUINED the lives of millions of Innocent people for their greediness.They are STILL Cruelly DESTROYING the Culture & killing innocent people.They should go away from this place. BOYCOTT there companies and the products they advertise for. BOYCOTT THEM.
Victoria Rodriguez on Wednesday, July 25, 2012
Honestly I thought she was Indian, really I did. And if the whole point of
her acting is be a shy girl, then she's doing it right! I thought the
dance, even though it did look awkward, it goes well with her character
because she is shy and probably didn't venture off much as a child. And
since this was probably her first Hindi movie, of course she's not going to
be the same as other actresses who have had years of experience. So please,
cut her some slack, it's not the end of the world.