Video of this song from youtube
Average Rating : 4.16
Total Vote(s) : 25
Please rate this song between 1 star and 5 stars (5 stars being the best). Just move your mouse on the stars above and click as per your rating. Your rating will really help us to improve our website. 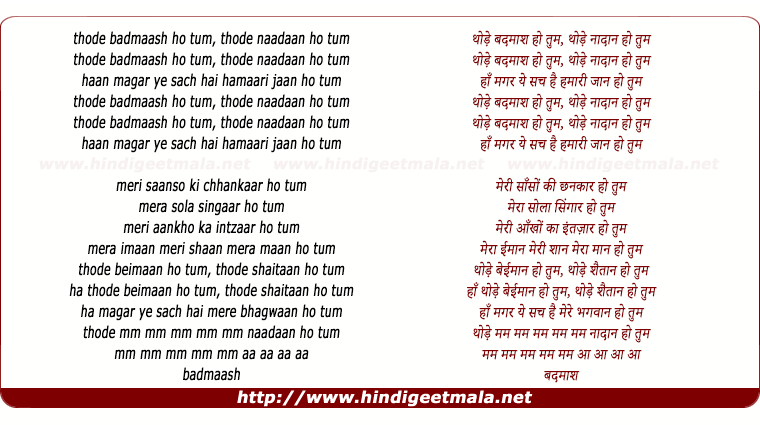 Comments on song "Thode Badmaash Ho Tum"
ZahidAmadxarif on Monday, October 11, 2010
You have a brilliant voice but you can definitely do a lot more work on
your voice...just practice your notes..in few parts your breath can be
heard more then the sur..just small things can mke a big difference...but
good luck..would like to hear you sing more!

shakz87 on Friday, November 16, 2007
Wow.what a sweet voice. I guess you have done some voice training,haven't you? I tried to sing too but was not as accurate as yours. Can play it on the piano though! Soooo happy for you...anyway,have you thought of participating in next Saregamapa?
KKS369(",) on Monday, December 07, 2009
your voice is amasing to sing a hindi song like this! honestly - its really
hard so well done but i think you strained towards the end of the song,
which is understandable, since its really hard. nice try tho :D keep
practicing!

Monica Sharma on Wednesday, September 03, 2008
u have such a beautiful voice u sound just like the person who sings this
song keep it up!!!! did u try out for chotte ustaad yet? u should go there