Video of this song from youtube
Average Rating : 4.24
Total Vote(s) : 158
Please rate this song between 1 star and 5 stars (5 stars being the best). Just move your mouse on the stars above and click as per your rating. Your rating will really help us to improve our website. 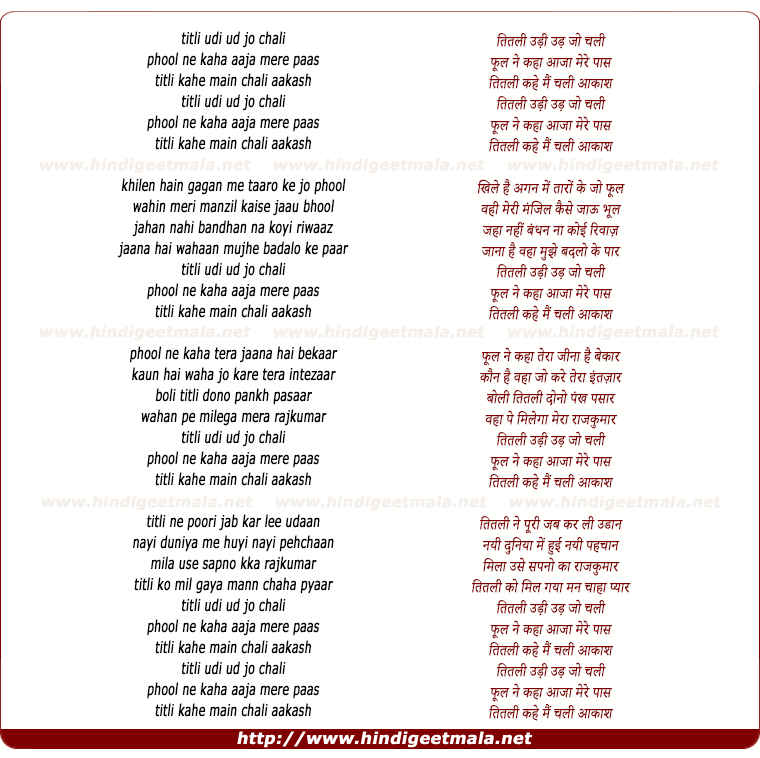 Comments on song "Titli Udi, Ud Jo Chali Phool Ne Kaha Aaja Mere Paas"
man radz on Wednesday, December 17, 2008
Sharda's voice is a breath of fresh air - soothing, sultry and
intimidating. It takes such a polished composer like Shanker-Jaikishen to
dare bring forth such a talent. Maybe she has not stood strong as other
divas of her time, but Sharada certainly is unique and shows what surprises
Bollywood can produce. Sharada has sung quite a number of hits. Youtube is
a place of honor where gems like this can be shared. So, anyone - dont
hesitate post more of her songs. Keep it up!!

aceji on Wednesday, November 18, 2009
Titli means butterfly. The song goes. Buttefly flew and flower calls, come
near me, She responds, no I am flying free in the sky. I can't forget
flowery stars in the sky,the world of absolute freedom awaits me there, how
can I forget that. I want to fly beyond the clouds.Flower says don't waste
your time cos no one awaits you there.She says spreading her wings, I will
meet my Prince charming over there. Butterfly flew onwards. ROUGHLY
SPEAKING...

pikluable on Monday, March 22, 2010
translation in English is nice,some of the other members'comments really hurt me,Lataji and ashji is great and uncomparable,actually sumanji was very talented but copied lataji leading to identity crisis of her own, sardaji was good but not of that callibre which ashaji and lataji possessed.
tony frank De' S on Friday, November 28, 2008
a beautiful song sung by Sharda pictured on two of the most beautiful
actresses of all times. The Legendary and evergreen Vyjayanthimala and
Mumtaz..two classical actresses.

chittaranjan mishra on Tuesday, September 07, 2010
@fayaaz007 You are right. Mumtaz outshines Vyjayanthimala, although the
role accorded to her is limited. She was the finest actress Hindi of the
golden age of Hindi cinema.