Video of this song from youtube
Average Rating : 4.47
Total Vote(s) : 51
Please rate this song between 1 star and 5 stars (5 stars being the best). Just move your mouse on the stars above and click as per your rating. Your rating will really help us to improve our website. 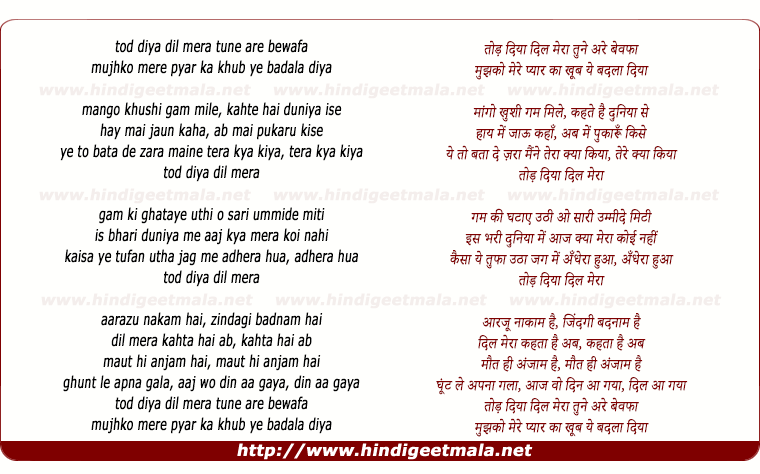 sonny19xx on Thursday, December 09, 2010
haunting melody from the early years of lata's glorious career. naushad's
music is breath taking , the orchestra is so grand for those days. even now
no nd can reproduce such grandeur. thanks youtube and cigyou.

fivestarwarrior on Friday, August 27, 2010
I used to be fascinated by this part of the film. Just before this sequence ends theres chorus that is best described as truly haunting.

This is a very emotive song and i find it profoundly reflects much of south Asian mentality...

Alas this world is truly a cruel and brutal place.

kianwar on Friday, September 12, 2008
Beautiful song by Naushsd which is different from his style. Naushad got
inspiration for this song from Khurshid Anwar's song - mere mundere na bol
ja kaga kaga ja - Suraiya in film Parwana 1947. Naushad include that song
in his selection of Best of Suraiya issued by HMV-India.