Average Rating : 3.95
Total Vote(s) : 21
Please rate this song between 1 star and 5 stars (5 stars being the best). Just move your mouse on the stars above and click as per your rating. Your rating will really help us to improve our website. 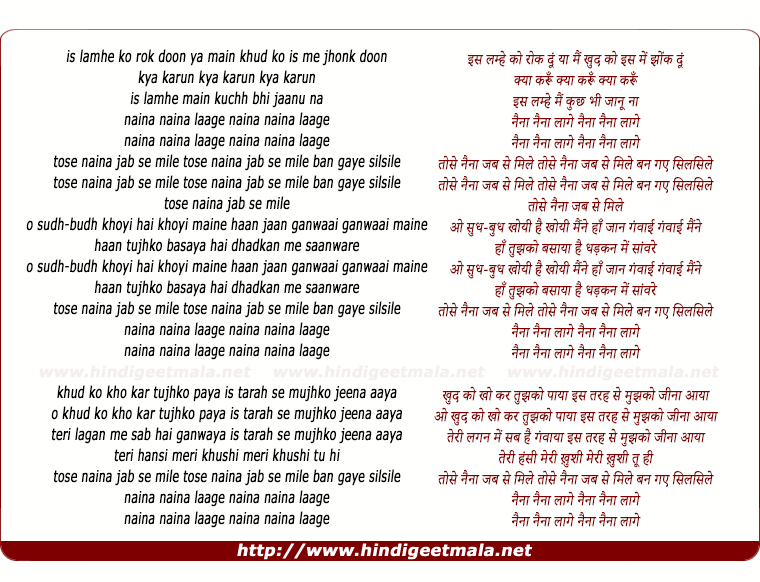 Comments on song "Tose Naina"
Debasmita Mishra on Thursday, October 31, 2013
I also think similarly,he's modifying his voice to it,his voice is sweeter
than this,hear him in Laal ishq,that's his actual voice and his original
voice is so good,i don't know why he's trying to make it stylised or
something like that?

Naveen Chadha on Sunday, October 13, 2013
That is a nice song ... Very smooth music and meaningful lyrics . I have
tried to cover this song using my guitar :) Do check on my channel ...

Kapil Pal on Saturday, October 12, 2013
He is a versatile singer; he can sing in any voice viz. Atif, KK, Sonu,
Kumar Sanu, Mohit, even Kishore Kumar.

Aashish Neupane on Saturday, October 05, 2013
Hey Guys pls check my channel and listen my songs.or u can just type
Denz and granz on search option.

Ashok Talwar on Tuesday, October 15, 2013
Beautiful song! Keep it up Arijit, u hv an attractive depth in ur voice. I
m ur fan aged 68.