Average Rating : 4.08
Total Vote(s) : 166
Please rate this song between 1 star and 5 stars (5 stars being the best). Just move your mouse on the stars above and click as per your rating. Your rating will really help us to improve our website. 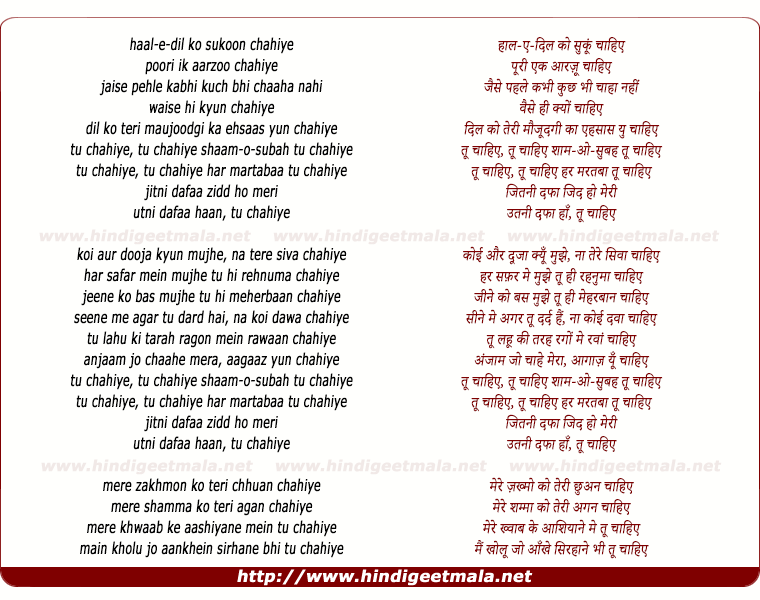 Comments on song "Tu Chahiye"
AEURO TV on Thursday, July 02, 2015
I want to tell you the truth. Your modern movies have become interesting
and not the whole world loses interest in movies in Hindi, because now
songs your movies in English and no beautiful melodies,and Actresses too
high don't look good on the screen. You need to return and remove the
former Indian movies. That you were famous for and you have come to love.
To make a casting among the common people and to look beautiful and of
medium height Actresses as the Amishа Patel, Preity Zinta, Kajol, Hema
Malini. After all, they brought India popularity around the world. And
create music not repeating national foreign countries, after all, words and
music in Hindi unique and unique on the planet. Select in the casting
beautiful Actresses and actors among ordinary people, there will be leaders
who will again bring success in India. Now I see you got the best Actresses
and actors in addition to the only tiger Shroff young people.﻿

Rehmaan Khan Fatahu on Tuesday, June 30, 2015
Beautiful song sung by the legend +Atif Aslam he is the best Golden Singer
of Bollywood ever its very beautiful #Romantic song and the lyrics are very
#Melodious and #Soulful, all the songs of +Bajrangi Bhaijaan is become the
biggest chartbuster ever after #SelfieLeLeRe, #TuChahiye and now the latest
release #BharDoJholiMeri, +Salman Khan and +Kareena Kapoor Khan looks
perfect together in the film, they make a amazing chemistry on the big
screen after #Bodyguard in Eid 2011, they looks lovely, sizzling and
beautiful in their film, eagerly waiting for #BajrangiBhaijaan this #Eid in
cinemas, i will watch it from #Paris in #France cant wait to watch this
film hopefully it will be the biggest successful film of all time. ﻿

Shilpa kulkarni on Friday, June 19, 2015
OMG...Mark my words.. he should do 1 intense romantic film.. seriously i
love this side of salman ..so romantic.. please salman stop doing this
masala type films. which have only action & dialogues. less romance ..uff m
tired now.. want to see u as an intense lovee..u will do it..smoothly ..
great.. Othrwise song is gr8..& ur chemistry with kareena ..my fav.﻿

Malay Samant on Saturday, June 20, 2015
Are you serious that songs of BB are good, they are not even average,
Pritam has completely ruined this album. Must admit he is out of form in
this one is surely his worst attempt. Should have been HR. Feeling
disgusted with the 2 songs that have released so far. Expecting a better
3rd one though.﻿

anshul srivastava on Friday, June 19, 2015
I bet ye song ek baaar me kisi ko itta pasnd ni aayega but 3 4 baar sun na
uske baad dheere2 song achcha lagne lagega its a soothng romantc song it
will take time to be on ur lips and i assure u will listen more than one
evryday :)﻿