Video of this song from youtube
Average Rating : 4.46
Total Vote(s) : 84
Please rate this song between 1 star and 5 stars (5 stars being the best). Just move your mouse on the stars above and click as per your rating. Your rating will really help us to improve our website. 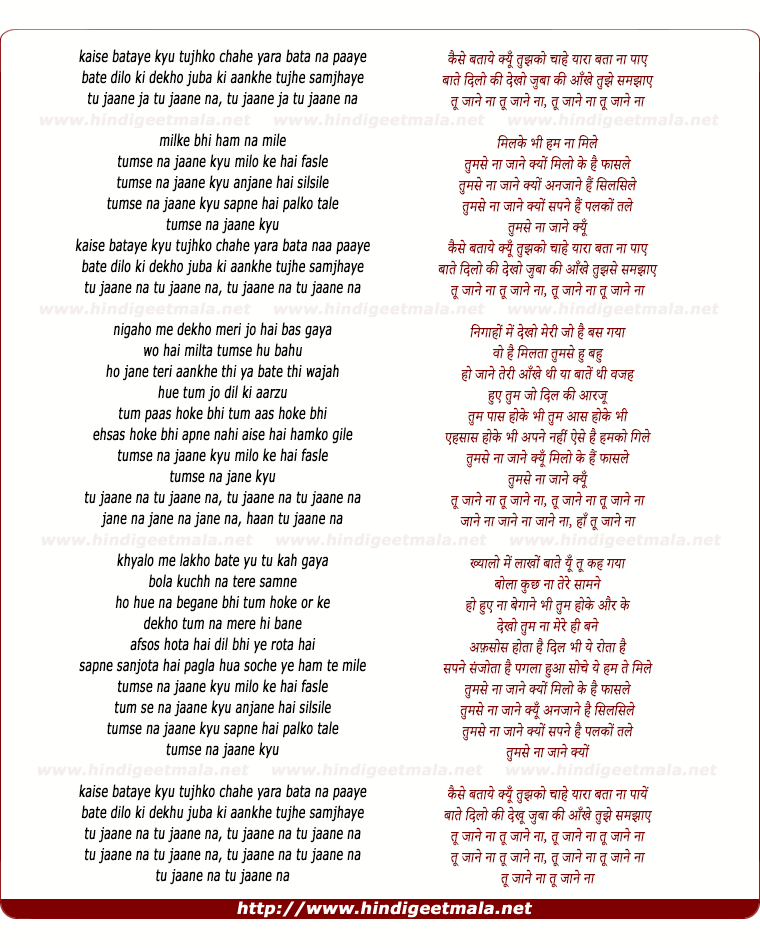 rose4soni on Sunday, March 27, 2011
@raza9715 actually its not always the voice of the singer tht fascinates me, its the way he/she sings and how it matches the music to express the song's meaning and feelings in the best way possible. and adding a video only enhances the listeners/watchers experience. if its atif singing and de song is not as slow, or he sings in a diff tone/pitches watever it wuldnt have the same effect. the way he sang was to match de music, and the way they actors acted was to match the song. credit goes 2 ALL
xglowingangelx on Tuesday, June 22, 2010
its hilarious because katina is half white/indian but 100% indians look whiter or lighter then the actual half white girl lmao! like aishwarya rai preity zinta kareena karishma kapoor soha ali khan hitrik roshan neal nitian mukesh etc lmao wow thats hilarious so she looks normal hah see there is no diffrence when a white and a indian breed they look exactly the same as the 100% indian girls even better the 100% girls and guys look better then the half white half indian hah hilarious! cant lie
cheetha1947 on Wednesday, June 30, 2010
aisa lagta hey dostooo key shahid itz the voice of angel.
so oooo beautiful.
Atif Aslam CHAH JAO>>>>>
you now dears he was my class fellow in P.A.F school lahore cantt from 92 to 98.
hez so brillient in his voice when he sung national songs on a stage wid just gitar..i have few pictures wid him as well,hez had an girlfriend she was "phatan"
names Amna khan,hez a very big lover of her,they spend a time in bunk on an near airport ,she was so cute and still living in defence

motorola99 on Thursday, June 03, 2010
@pererahsn, the translation is roughly,

Chorus:
How do I tell you, why I like you ?
My good friend (love), I dont know how to say.
The feelings(speech) of the heart, if you look at the eyes, they will tell you.
You dont know or you dont seem to understand.