Video of this song from youtube
Average Rating : 4.22
Total Vote(s) : 60
Please rate this song between 1 star and 5 stars (5 stars being the best). Just move your mouse on the stars above and click as per your rating. Your rating will really help us to improve our website. 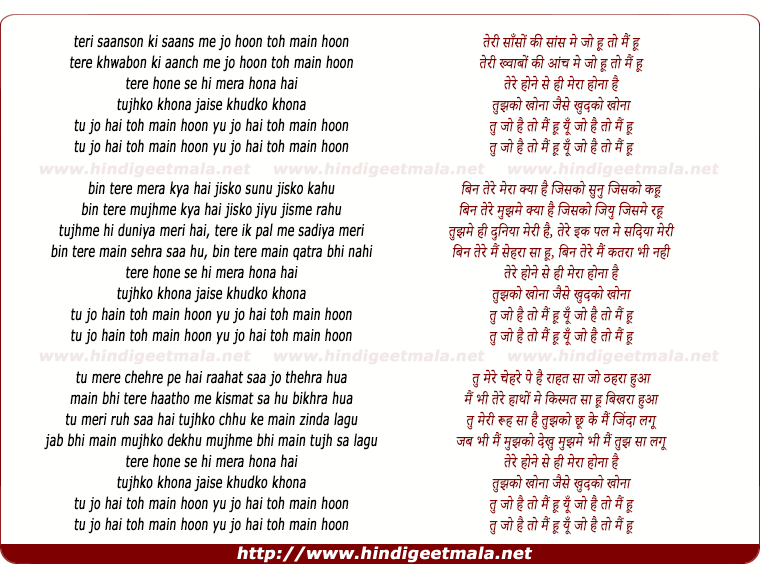 Comments on song "Tu Jo Hain Toh Main Hoon"
Shanu Bhai on Thursday, April 02, 2015
If indian films cant afford high level VFX ..den y they are writing d
stories which need VFX ng computer generated graphics... they should stop
writing d Stories which Require More VFX work... im nt saying that
Hollywood is Superior to all other film industries... if u watch south
korean movies...they giv more importance to Story nd acting rather than
spending into VFX.. they dont make much complicated VFX movies ..coz they
knw that they cant pull it off... so They make beautiful Trillers nd Luv
stories... so Bollywood should stick into those kind of movies in which
they are superb.﻿

Sakina Sehgal on Tuesday, March 17, 2015
I hear a lot of people say arijit singh is getting to be overrated nowadays
but at least he's versatile, Ankit tiwari's voice not only sounds the same
in pretty much all his songs, but even his compositions all have the same
tune basically (this sounds just like dil darbadar/tu hai ki nahi). I like
his voice and this song but he needs to come up with something new already.
﻿

Priyanka Chopra on Tuesday, March 17, 2015
+Sohom Pramanick You are absolutely right... Ankit will not take there
places... Firstly he is already far away then them and secondly He is a
composer & singer... I must say that both of them will never take Ankit's
place in there entire life...﻿

Sameer Gidvani on Monday, April 06, 2015
we hope emraan hashmi does not kill and does the same copy of his raaz-the
mstery continues