Video of this song from youtube
Average Rating : 4.83
Total Vote(s) : 6
Please rate this song between 1 star and 5 stars (5 stars being the best). Just move your mouse on the stars above and click as per your rating. Your rating will really help us to improve our website. 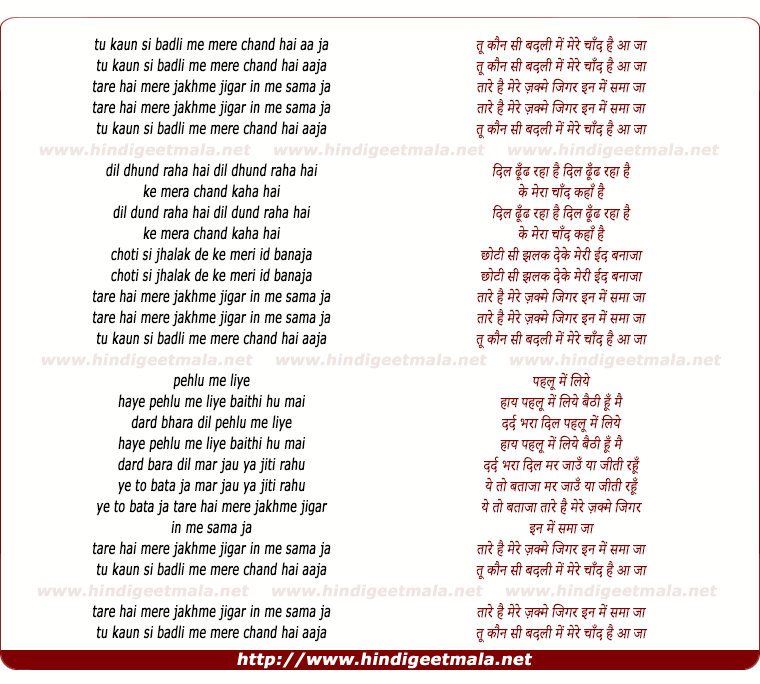 Comments on song "Tu Kaun Si Badli Me Mere Chand Hai"
SPChitale on Thursday, January 13, 2011
I was a just born child at the time of this song but I distinctly remember this song as my elder brthers used to sing this song and I do like and love this melody. Perhaps it has Raag Patadeep as its base.
alishah7706 on Wednesday, October 06, 2010
what a music, what a voice and rendition by noor jehan .
no one can compete with noor jehan then who can come infront of melody queen madam noor jahan.

Gourav Das on Tuesday, October 27, 2015
my grandfather is 94 years old and he became very happy after i searched
out this song for him,. It used to be his favourite song when he was young.﻿

Vidur Sury on Thursday, January 13, 2011
@SPChitale Yes, you're right. That's what I too thought, especially the
stanzas.

dilip dalal on Saturday, May 31, 2014
Beautiful indeed. Great singer with a very unique style.
Thanks for uploading.﻿