Video of this song from youtube
Average Rating : 4.56
Total Vote(s) : 34
Please rate this song between 1 star and 5 stars (5 stars being the best). Just move your mouse on the stars above and click as per your rating. Your rating will really help us to improve our website. 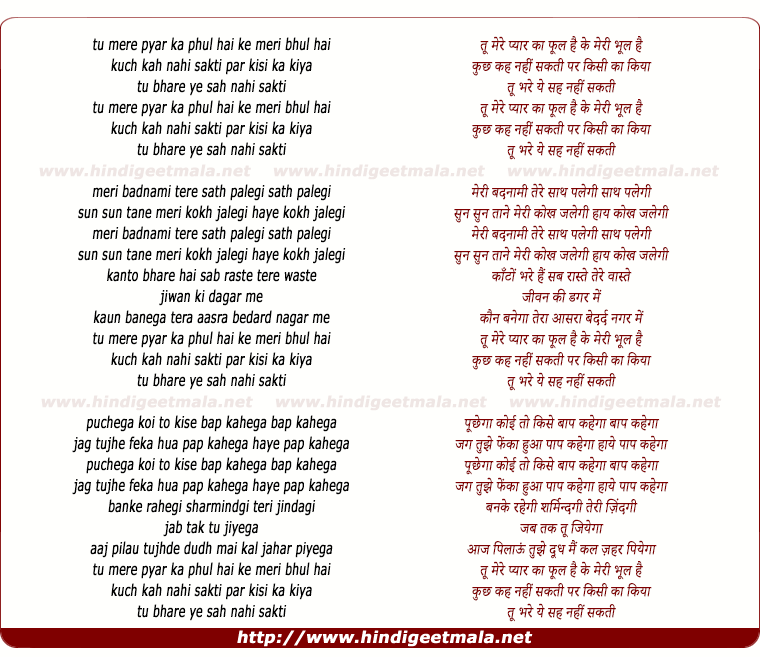 Comments on song "Tu Mere Pyar Ka Phul Hai Ke Meri Bhul Hai"
M. Saleem Raikodi Raikodi on Tuesday, November 24, 2015
Sahir ( means magician in Urdu and Arabic) . True to the name, he was a
great magician who could weave words as no one ever could. The land of
Punjab thrown out of from under its treasure one after another gem. Sahir,
Iqbal, Bhalki, Bibi Surinder Kaur, Rafi, Hafez Jalandhari many many more.
Punjab ke mitti mein bahut Khuwwat hai.﻿

Manjinder Singh on Saturday, June 14, 2014
This thing did not actually happen to Mala Sinha then how could she convey
such feelings beautifully.Sahir was a man,unmarried,say without a child/son
so how could he get so deep in an woman's heart and mind and bring out such
jewels..Salute to our great movies Masters..﻿