Video of this song from youtube
Average Rating : 4.11
Total Vote(s) : 855
Please rate this song between 1 star and 5 stars (5 stars being the best). Just move your mouse on the stars above and click as per your rating. Your rating will really help us to improve our website. 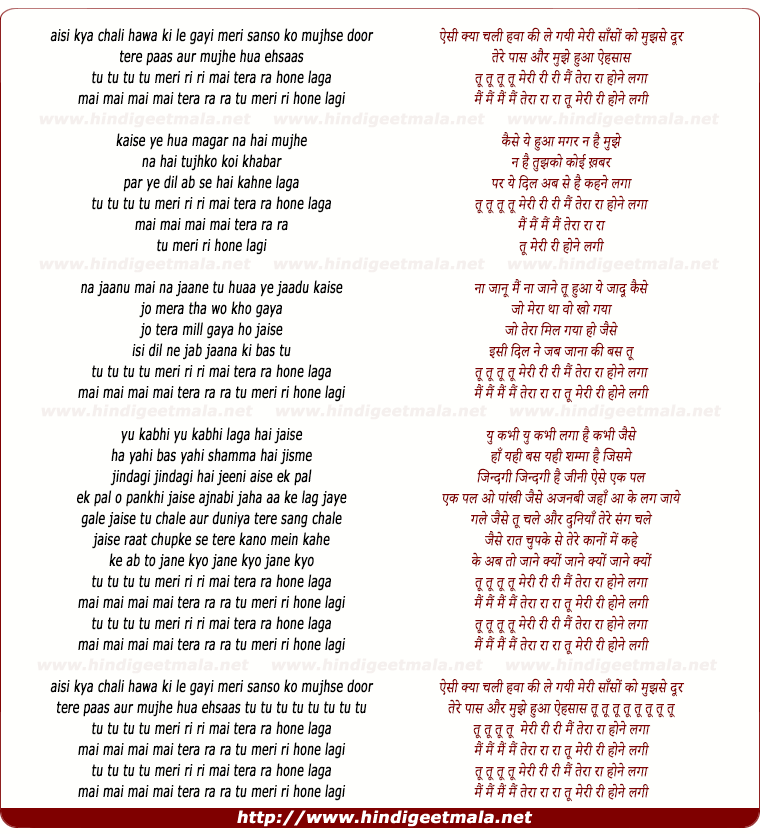 Comments on song "Tu Meri Main Tera Hone Laga"
vrowmuria on Thursday, November 27, 2014
Hi bro, I live in India but I agree with you 100%. I like Hollywood movies
more than Bollywood movies. In Bollywood movies even if they would make an
historic movie like "Bhag Milkha Bhag" or "Jodha Akbar" or "Bhagat Singh"
or "Asoka", the historic character will dance and sing. Did Milkha Singh
sing and dance "Hawan Karenge Hawan Karenge" in reality? Did Akbar sing in
reality? Did Bhagat Singh sing emotionally in reality? Did His Highness
Asoka sing "O Re Kanchi..." in reality? All these are useless fake and
frictions that you can see only in Bollywood movies. On the other hand see
Hollywood's historical movies like Titanic, Gladiator, Troy, to just name a
few. If Titanic would have been made in Bollywood, then Jack and Rose would
sing and dance 4-5 dance numbers for sure. If Troy would have been made in
Bollywood, then Achilles (Brad Pitt) would sing self boasting song after
every victory. hahahahah. Just imagine how the movie would have been in
Bollywood flavour. Horrible even in just thinking.﻿

Maryam M on Saturday, September 20, 2014
One thing I don't get is why people from west ( generally ) are
kinda threatened by dance and singing in Bollywood films :)) It's
ENTERTAINMENT ! Nothing we see in movies are realistic and they shouldn't
be ! that's why poetry and singing and acting exists ! to take us some
other world even for a second, so we can forget about our problems which
are very much real ! not to mention nothing we see in hollywood movies are
realistic either ! that's the point , and Why should movies from hollywood
and bollywood be the same ? when I want to watch serious movies with no
songs , I;ll watch hollywood films and when I want to see the sweetest
smile ( SRK ) most beautiful actresses , and Amazing songs and dances
Bollywood is my pick,And Know this I'm Not indian,I'm Iranian.and we have
enjoyed Hindi films for decades :) I accept that they used to be much more
indian and the dances and songs were PRICELESS back then , but I still
enjoy it . ﻿

Serenity on Tuesday, September 02, 2014
To be frank, I love this song and Hrithik's moves (and his face, because
like it's perfect). BUT WHY IS IT RELEASING ON THE SAME DAY AS HAIDER!?
Honestly, Haider is amazing (from what I've seen) but quite frankly,
India's audience would prefer to see Bang Bang and arghhhhhhh. I personally
would go to watch Haider but it's less likely to become a hit with this
releasing on the same day. Idk, I just don't feel Haider will be
appreciated as much as it deserves to be because Bang Bang will mask it.
And come on, Shahid is a darn fine actor (and looks incredibly hot in
Haider too). I'm not much of a Katrina fan so maybe I'm being biased but
whatever. "Freedom of speech" lol﻿

Joe Mohen on Sunday, October 12, 2014
I live in New York and my 11 year old son asked me to take him and his
friends to see Bang Bang because of the action packed trailer. While the
boys enjoyed the explosions and shooting, their jaws dropped when the hero
started dancing and singing, as we do not see this in American action
movies. That said, I was hysterical laughing because I did not expect it.
That said, Roshan is a great, great dancer, and Kaif is appealing. I would
love to see them star in some Hollywood movies as well. ﻿

Partha Roy on Tuesday, December 23, 2014
Hi guys, I have to admit.. I was the one to post negatively about Siddharth
Anand's work before but after watching this movie, I have to say that this
was one really nice movie

I would however still stick to the point that some dance sequences which
are unnecessary can be avoided like Tu Meri from Bang Bang! but that said,
this is a ncely shot movie

The action scenes in particular were just great

I've also watched Knight and Day but I think Bang Bang! is much much
better ﻿