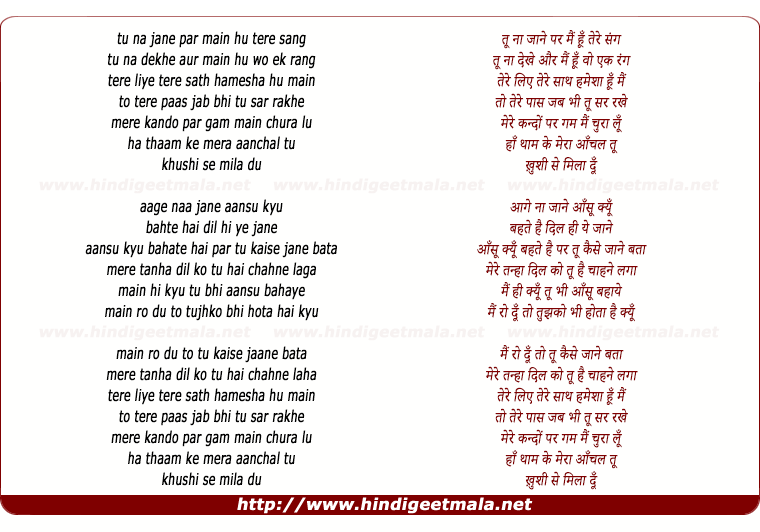 Comments on song "Tu Na Jaane Par Mai Hu"
Varshini Varanasi on Wednesday, July 18, 2012
Unfortunately for you, you are wrong. Don't you realise you're only
desperately making statements to save your face from defeat here? LMAO.
Under-world influence? You must be kidding. As I mentioned in one of my
earlier comments, you should know how to promote yourself, not just have
talent. It takes a lot of struggle to get thru to music directors, and then
to get a chance to sing for them. Even then, you only get small projects
for years, and then you might have the chance to make it big.

Varshini Varanasi on Monday, July 16, 2012
India respects the talent it has within itself. But it also appreciates
talent from around the world. Rahat Fateh Ali Khan definitely deserves the
recognition he's got, he's phenomenal, and it's almost universally
accepted. No one's plotting anyone against anyone. It's all bout real
talent. Abhijeet did sing many songs. But he's not as good as those people
who 'replaced' him, I've heard a lot of people say this. If SRK was the
God, then Salman Khan would've been long gone, too!

Varshini Varanasi on Tuesday, July 17, 2012
I did not say Atif and Ali Zafar replaced him. I was mentioning their names
only as an example that the country or religion alone don't bring success
to anyone. Talent plays a much bigger role. But again, tlent alone won't
help. I'm not a struggling singer. I'm only an amateur yet, and I'm only
19. By the time I'm 25, I know where I'll be. Why did you call Abhijeet a
melon? Try thinking. You'll know. And Abhijeet's clash with SRK, btw, was
comparatively pretty recent.

Varshini Varanasi on Saturday, July 14, 2012
She'll get the same in India, as well. You've to give it time. Shreya
Ghosal, being the phenomenal singer that she is, had to participate in the
Sa Re Ga Ma contest a second time, even after winning it the first time,
only to catch the attention of directors. In a couple of years, I'm sure
this girl will be somewhere on the top in the Indian music industry, if she
keeps going like this.

Ritesh Verma on Thursday, November 08, 2012
what a voice and excellent composition too!! This world is more blessed
because of people like you, Shankar Tucker. Long Live! This song produces
such strong emotions- it is spooky, soulful, sufi. I keep sharing you and
your music with all my Indian and American friends.