Video of this song from youtube
Average Rating : 4.19
Total Vote(s) : 227
Please rate this song between 1 star and 5 stars (5 stars being the best). Just move your mouse on the stars above and click as per your rating. Your rating will really help us to improve our website. 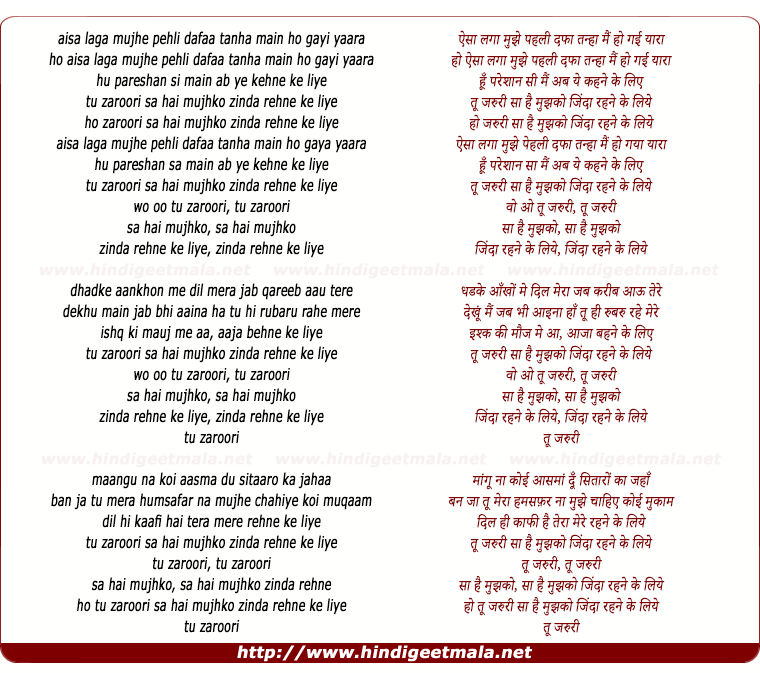 Comments on song "Tu Zaroori"
Hardik Maheshwari on Wednesday, December 24, 2014
She didn't get the chance because of her skills or looks, she got it
because she's pc's sister. Girls better looking than mannara can be found
on the streets. And people are still supporting her, though they know she
has no talent whatsoever (if you have watched zidd, you'd know that). Thats
why hardworking people dont get chance in the industry, because people like
mannara snatch it. This is the hard truth to acknowledge.﻿

aaliyah1829 on Friday, January 09, 2015
"Mannara's too fat to be an actress" so many things wrong with that
statement. Shes a NORMAL size. Most girls actually look like her. Most of
these actresses have smaller frames which make them look super skinny and
unhealthy which isn't their fault, but causes a warped vision of what a
"normal" body looks like due to their impact on how society accepts as a
normal or attractive body type. ﻿

hamna khan on Sunday, November 23, 2014
this song is my favourite song its the best karanvir sharma and mannara
suite its gonna be a awesome movie I love all songs they both r great I
love them they can act wish they do another film together karanvir sharma
and mannara u suite﻿