Video of this song from youtube
Average Rating : 4.79
Total Vote(s) : 14
Please rate this song between 1 star and 5 stars (5 stars being the best). Just move your mouse on the stars above and click as per your rating. Your rating will really help us to improve our website. 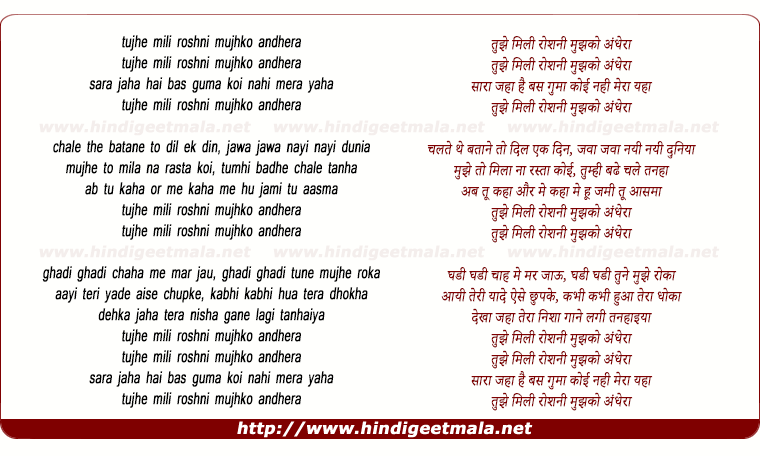 Comments on song "Tujhe Mili Roshni Mujhko Andhera"
tubepipevision on Thursday, August 19, 2010
Today I saw Actress Saeeda Khan on screen for first time, with identity,
though I saw this movie on TV nearly 25 years ago. She had a very tragic
end of life around 1990. She had married noted director Brij (maker of
block buster hit movies like Victoria No. 203, Chori mera kaam, Ek se
badhkae Ek etc.). During a function at home Brij killed his wife and
daughter, and also himself, with gunfire in a drunkard rage. Both the Sons
Vijay and Kamal sadanah are in film making/acting.

ssg on Tuesday, December 20, 2011
This is Cinematic acting. Sayeeda Khan is underplaying her emotions very
well.In the 1st antara its a mid-shot, Chale the basaane do dil ik
din,jawaan jawaan nayee nayee duniya Cut to the cose-up and 2nd line starts
Muje to mila na rasta koyee Watch a tear flowing from her right eye as she
sings 2nd line.No melodrama, pure emotions.I havent seen the film, but she
must be following the script and director s wishes.and accordingly enacted
the song.

Rajeev Pradhan on Wednesday, January 06, 2010
Revered Sir, we can't blame Asha JI,she gave her best but it's 'Saida Khan'
along with her wooden expressionless face unable to act and perform
accordingly. with best personal regards.

V. Siddhartha on Tuesday, January 05, 2010
A sad-sweet song sung with great depth of feeling by Ashaji but not enacted
on-screen with commensurate skill by the actress, presumably Saida Khan.
Thanks, Rajeev.