Average Rating : 4.43
Total Vote(s) : 63
Please rate this song between 1 star and 5 stars (5 stars being the best). Just move your mouse on the stars above and click as per your rating. Your rating will really help us to improve our website. 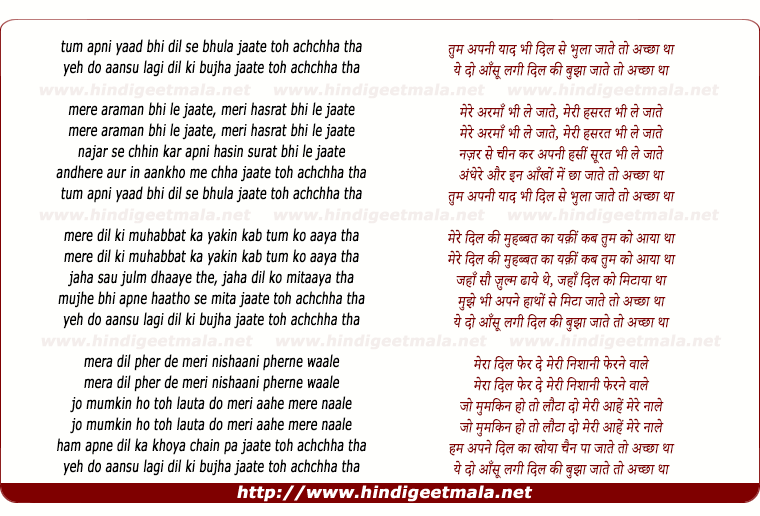 Comments on song "Tum Apanee Yaad Bhee Dil Se"
RealMusicKing on Sunday, February 27, 2011
Jan Nisar Akhtar made his film song writing debut with Yasmin. C. Ramchandra brought the best out of Jan Nisar with these songs. All songs of the film were hits
Milahi1935 on Thursday, April 21, 2011
Talat made this good tune into a masterpiece. Lata was excellent. The duet
was too short. The music composer should have given one more verse to both
Talat and Lata. What surprises me is that after hearing Talat how could any
bright music composer give his music to any other singer. The music givers
of Talat era must be tone deaf and mediocre, as they gave him very few
songs between 1944 and 1976, totaling hardly 900. Talat should have been
given at least ten thousand songs. Indian music was ro

shahidlatif866sl on Saturday, December 08, 2012
Talat Mahmood Ji ki awaz jadoo hai.
Enchanting. Mashoorkun. Meaning something which casts a spell.
The only thing you want to do is to lay down close your eyes and be spellbound.
No matter how you describe it you cannot do justice to his voice.
Heavenly.

Imtiaz U. Faruqui on Friday, March 18, 2011
@kqs92 Thanks to everyone for appreciating and enjoying this beautiful
melody , God has given the ability to enjoy music to some but not to
everyone , Blessed are those who understand .