Video of this song from youtube
Average Rating : 4.28
Total Vote(s) : 134
Please rate this song between 1 star and 5 stars (5 stars being the best). Just move your mouse on the stars above and click as per your rating. Your rating will really help us to improve our website. 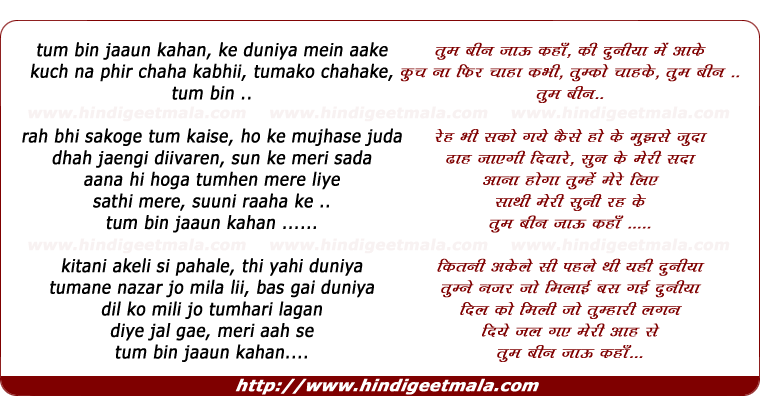 Comments on song "Tum Bin Jaoon Kahan - By Kishore Kumar"
PONNADA SRINIVASPRASAD on Sunday, April 20, 2014
In fact, I am a die hard fan of Mohammed Rafi saab and He has been the most
and real versatile, industrious singer and equally popular singer,
notches/way ahead above Kishore, Mukesh Etc. But this song, KISHORE version
is more popular and he has excelled in Yodelling and Kishore delivered well.
Some songs are tailor-made for some singers. Let us not quibble, Rafi has
been declared as SUPERIOR SINGER of all times, even Kishore himself
acknowledged this and ONLY fans always indulge in tantrums. Both Legends
admired each other and have been friends forever.﻿

pistachioguy on Tuesday, May 10, 2011
@pistachioguy - In plain fact, the smoothest and softest voice ought
properly to belong to Manna Dey, who for all practical purposes was light
years ahead of Rafi or anybody else - songs like Bhay Bhanjana and Sur na
Saje from Basant Bahar are impossible to sing with quite the degree of
finess Manna da brought to bear on them. Technically he was superior to
everyone else in voice quality, technique, and range. Others like Talat and
Hemant had their moments - but Kishore sets a very high bar.

iamyourfriend007 on Wednesday, September 12, 2012
THERE IS MUCH FEELINGS IN THIS ONE THAN THAT OF RAFI' S. Rafi can beat
kishore in classical ONLY. But kishore can beat rafi in EVERYTHING except
classical. Kishore was a very sad person in his personal life thats y no
other singers including rafi in the world could have beaten him in
delivering natural feelings. Other biggest plus point of kishore was that
he was an actor thats y he was a master in singing with different moods,
style, expressions, feelings. His voice fits in any situation.

wtc175 on Tuesday, May 10, 2011
@pistachioguy Not humbug . Scientific. Viewed through an oscilloscope you
can see the difference between a 'smooth voice' and a 'rough' voice. I am
not saying one is better or more pleasing than the other - but one can be
analysed as being 'purer' than the other. which is why Kishore's voice has
an 'edge' -ie grating whereas Rafi's is 'purer' . ADSR waveform dictates
how sound behaves ie 'Attack Decay Sustain Release' This is an OBJECTIVE
not SUBJECTIVE analysis. Thanks for your comments.

lahore2vancouver on Tuesday, May 03, 2011
@raviterkar DEAR, Yodelling was not Rafi,s game .I been soooo
confused my Whole life which was the better .I met ManyInd0- pak singer
Particularly A. Nayyer From ...lollywood ... Manay Daey from Bollywood
.Used sdame line for Kishorda " Assi Ghambhir awaz indo pak mein Dobarra
nahee aye ghee " I think Rafi has an edge over all male singers That he has
been using " Murqies' so nicely like Lata ji in his song ..Aruna laila in
Pak used to Do ! ...