Video of this song from youtube
Average Rating : 4.62
Total Vote(s) : 66
Please rate this song between 1 star and 5 stars (5 stars being the best). Just move your mouse on the stars above and click as per your rating. Your rating will really help us to improve our website. 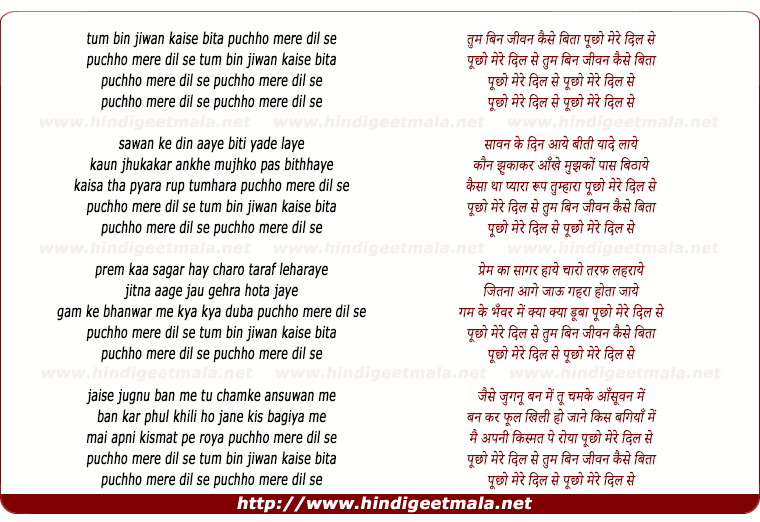 Comments on song "Tum Bin Jeewan Kaisa Beeta, Puchho Mere Dil Se"
ShivKumar44 on Friday, December 23, 2011
@Shemarooent:I do'nt know how to thank you..there is no such words in any
language. I have this song in my collection but I forgot the name of the
movie.However,Manoj Kumar is one of my favorite Hero so is Sadhana. The
year 1967 was remarkable year for me. I used to listen songs from Radio
Ceylon and Vividh Baharti.Whenever this song was on the air I could not
help tears from my eyes.After 45 year we met again.She is widow and I wish
I was not married.Thank you once again.

nandu1f on Sunday, June 17, 2012
Be careful. It is alright to cherish memories. But encounter with an old
flame of impressionable youth era is very risky. The world of memories is
enchanting since it is filtered through the cloth of nostalgia. What is
nostalgia is not sacrosanct.