Video of this song from youtube
Average Rating : 4.56
Total Vote(s) : 68
Please rate this song between 1 star and 5 stars (5 stars being the best). Just move your mouse on the stars above and click as per your rating. Your rating will really help us to improve our website. 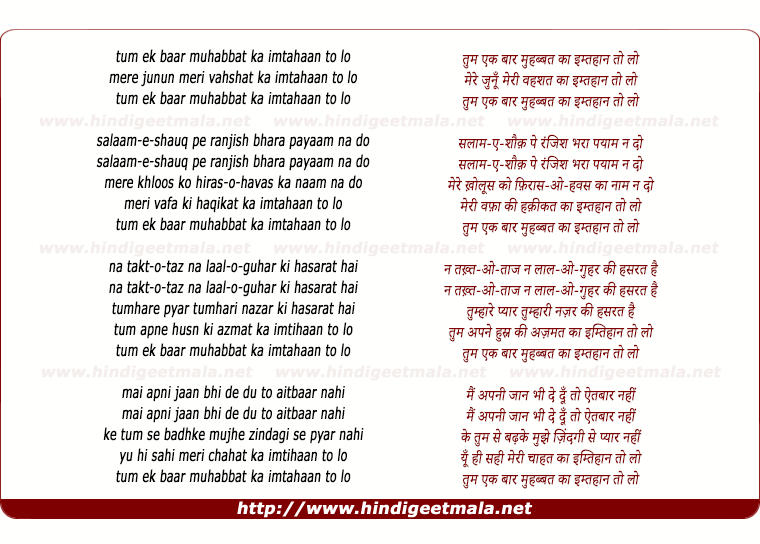 Comments on song "Tum Ek Baar Muhabbat Ka Imtahaan To Lo"
Dee Thakore on Saturday, August 28, 2010
@supersynch I've a doubt it's not a Babur...but Humayun. Babur never was
inlove...but Humaun was in deeply love with Hamida Banu (mother of Akbar).
The story is about Babur has to decide weather or not give capital
punishment to his son Humayun. who had given a Bail-bond his only ally,
Kalim..who was on death row. but he forfeited that...now Babur has to give
the justice to his beloved son.

Dee Thakore on Saturday, August 28, 2010
@supersynch "His name was Baburi," it means own by Babur or property of
Babur. He had very strong feeling for him that's how he described in his
autography. he was a king of Samarkand than Kabul, became a padshah...he
descended from both Timur and Chingiz Khan dynasty, so he should have lots
of wives.

raqib56 on Monday, April 06, 2009
the miracle called Sahir Ludhianavi's
yet another manifestation, and so
beautifully composed by Roshan with
exceptional " jal tarang " effects and the
saranghi very appealing !! the most beautifll love song.

Dee Thakore on Saturday, August 28, 2010
@supersynch well, Babur had nine wives but he never was in love with any of
the women. When he was a young man he met this young man, whom he loved
thru out his life. Source: from his autography (Baburnama).

Dee Thakore on Sunday, October 18, 2015
She is Azra, married the brother of Siraj Lokhandwala of Lokhandwala
Constructions. He is Sohan Kapila (father of actress Padmini Kapila).﻿