Average Rating : 4.35
Total Vote(s) : 196
Please rate this song between 1 star and 5 stars (5 stars being the best). Just move your mouse on the stars above and click as per your rating. Your rating will really help us to improve our website. 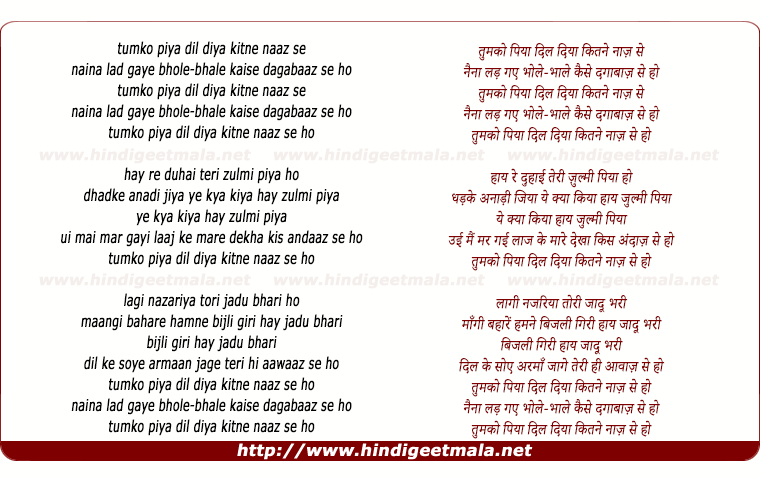 Comments on song "Tum Ko Piya Dil Diya Kitne Naaz Se"
Vinayak Hirlekar on Saturday, May 23, 2015
G S Kohli, the Music Director for this movie, worked as an assistant to the
legendary OP Nayyar saheb, for years. Clearly OP's influence is
unmistakable in this song. The guitar, the rhythmic beats, instrumental
interludes all distinctly reminds of OP. But that said, the composition is
sweet & melodious.One notable fact for the music connoisseurs, is OP never
used Lata, and always used his muse Asha for his songs, however in this
song, Kohli saheb used Lata & Usha but not Asha. Ain't it fun! :). Anyway,
I can't recall other successful & melodious songs form GS Kohli. Think,
Kohli saheb faded away in later years in sharp contrast to his boss OP
saheb's illustrious & legendary career. Indeed, the Lord Ganesha works in
mysterious ways. Enjoy the song fellas...! I love it too..!﻿

Naveen Dighe on Thursday, February 05, 2015
BELIEVE ME EVERY SONG FROM THIS B GRADE F C MEHRA FILM IS A SUPER SUPER GEM
THE CREATOR OF THIS GEMS WAS G S KOHLI THE ERSTWHILE ASISTANT TO MUSIC
DIRECTOR OP NAYYAR IT IS SAD THE SUPER TALENTED MUSIC DIRECTOR G S KOHLI
NEVER GOT HIS DUE ﻿

gopal sinha on Friday, February 21, 2014
One of the famous Travancore-sisters, Ragini was a very beautiful dancer
and actress. Shikari has beautiful and popular songs composed by G.S.
Kohli, an assistant to O.P.Nayyar. This song can be easily confused for a
L.P. composition.﻿

Bharat Jani on Monday, May 13, 2013
The best synchronize dance in hindi film sofar.Ragini beats Helen in
this dance sequence.great music by GS Kohli...thanks for uploading
Rajevsab